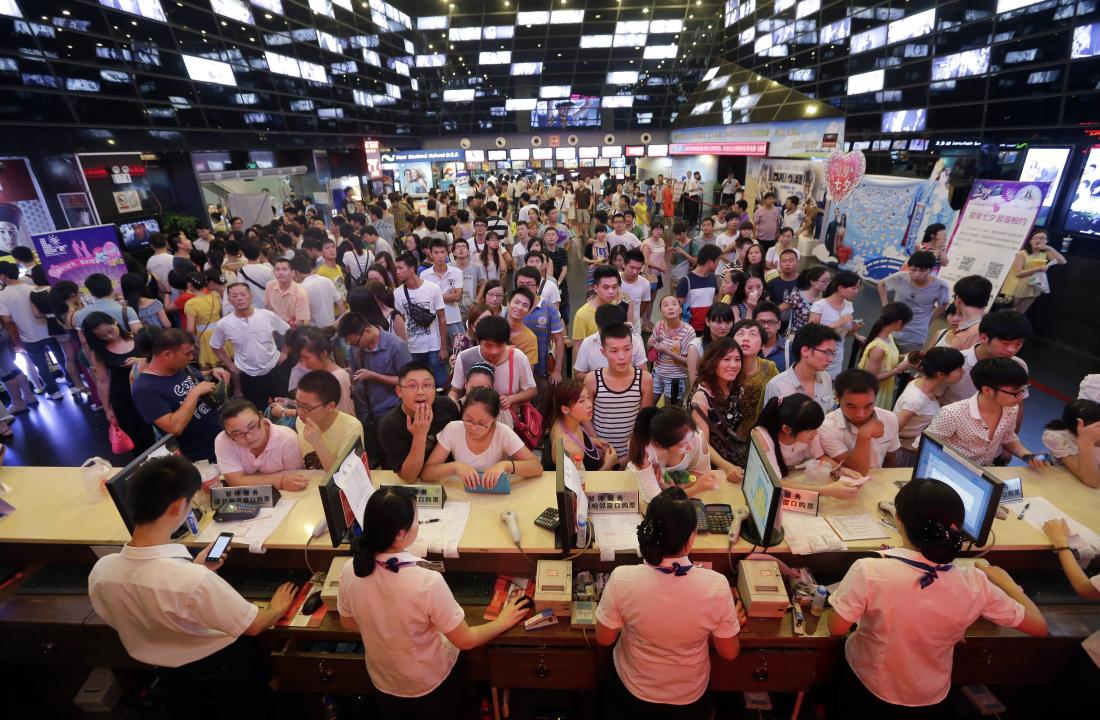 China this week rolled out new rules on entertainment news as top lawmakers reviewed a draft of the country’s first film law. The State Administration of Press, Publication, Radio, Film, and Television (SAPPRFT), China’s top media regulator, announced new regulations against entertainment news promoting “Western lifestyles” or poking fun at Chinese values, and urging news organizations against putting celebrities “on pedestals.” The new rules come as the latest move in a steady crackdown on the news media under Xi Jinping, which most recently disallowed online news portals from using social media sources, required websites to monitor content around the clock, and increased the liability of editors for content direction and production. At Reuters, Michael Martina reports:

News content should not make improper jokes, defile classics, or “express overt admiration for Western lifestyles”, the regulator said in a circular, according to Xinhua.

“They should also avoid putting stars, billionaires or Internet celebrities on pedestals”, and not advocate overnight fame or hype family disputes, Xinhua said.

China’s legislature this week is also reviewing a draft law that would require film industry workers to maintain excellent “moral integrity”, after recent cases in which celebrities had been arrested for drug offences and prostitution, Xinhua said in a separate report. [Source]

Celebrities’ “lavish lifestyles” have previously been ordered un-coverable by central propaganda authorities, and a 2015 People’s Daily editorial warned that such lifestyles can “negatively impact” the masses. SAPPRFT’s call for “positive energy”—a hallmark of Xi’s propaganda strategy—and “mainstream ideology” to dominate coverage comes as the Xi administration continues a crackdown on Western values while promoting ideological orthodoxy throughout society, the academy, and the Party.

While the new rules’ ideological focus is in line with Xi’s trend of increasing media control—one that The News Lens’ J. Michael Cole recently described as reaching a new level of “absurdity” that “would fit perfectly in a Kafka or Orwell dystopian novel”—the focus on celebrity lifestyles may be at least partially motivated by a talent bubble in China’s entertainment industry. At The Wall Street Journal, Lilian Lin reports, noting that SAPPRFT announcement came on the heels of an investigation into the regulator by the Central Commission for Disciplinary Inspection:

Using big-name stars, especially fresh-faced idols, is usually considered the best bet by investors hoping for ratings or box-office success, which drives up the price of celebrities. The Chinese actress Fan Bingbing was recently named as the world’s fifth best-paid actress by Forbes, with $17 million over the past year, a number that takes into account all the star’s revenues.

The media agency said it would lead industry associations and major TV and film producers to map out a “self-disciplinary convention” in order to crack down on exorbitant star pay. TV stations are now not allowed to decide on the licensing price of TV dramas they plan to buy based on big-name actors in the show, or ask the show to feature any specific stars.

Film and TV producers in China have been complaining for years about high actor fees, which they say take up too much of the production budget. Industry associations also called for action. Yet money has been flooding into the film industry, which has an annual growth rate of 30%, and this is a huge boost for talent pay. [Source]

News organisations must also set up an performance review mechanism that will monitor the idealogical orientation of their work to help “strengthen restrictions, promote the good and eliminate the bad”.

Those news organisation that are found to be violating the regulations will be punished.

Penalties could include public criticism, the suspension of programmes and even the revoking of the organisation’s production licence, the notice said.

The announcement was made as the National People’s Congress Standing Committee is reviewing a draft law on the film industry to ensure that those who that work in it will strive for “excellence in both professional skills and moral integrity” while maintaining a positive public image. [Source]

The Hollywood Reporter’s Patrick Brzeski reports on the long-awaited and wide-reaching draft film industry law that was reviewed by the NPC Standing Committee on Monday. As China’s film industry has grown rapidly in recent years, a deepening relationship between Chinese and American entertainment firms has led to some complications surrounding Chinese import rules and tight censorship requirements, which some Hollywood studios have readily catered to.

China’s box office is expected to surpass North America’s within the next three years. This week’s review process at the National People’s Congress Standing Committee, which runs from Monday to Saturday, provides a sneak peek of the new rulebook likely to govern the world’s soon-to-be-largest movie market. The topics addressed range from censorship policy to market access for foreign films to how to handle artists “tainted” by drug and prostitution scandals.

Among the proposed guidelines made public Monday by state-run news agency Xinhua was a rule requiring distributors to ensure that local Chinese films make up at least two-thirds of total run time on Chinese screens. China already limits revenue-sharing foreign film imports to just 34 titles per year under a trade agreement with the U.S. That deal is set to expire at the end of this year, and the additional limit would seem to ensure that Chinese movies dominate market share regardless of whether the quota is lifted, relaxed or renewed. In recent years, it’s been understood that China’s regulators have aimed to secure at least 55 percent of local box office for Chinese films.

The draft law also includes provisions designed to crack down on box-office fraud, stating that “film distribution companies and cinemas should not fabricate movie ticket sales or engage in improper methods,” according to Xinhua. In 2015 and 2016, several local production companies and distributors were caught gaming China’s box office by mass-buying tickets to their own movies. The tactic was used to create the impression of a hit for marketing gain, or to manipulate China’s hot financial markets. Under the new law, companies engaged in such practices could be fined up to 500,000 yuan ($75,000), hit with business suspensions or outright banned, Xinhua said. […] [Source]

The draft film law and the new SAPPRFT entertainment news rules touch on similar ground regarding the regulation of moral integrity, the downplaying of celebrity luxury, and the casting of stars into societal role models. The South China Morning Post’s Mimi Lau reports:

The National People’s Congress Standing Committee is reviewing a draft law on the film industry to ensure that those who work in it strive for “excellence in both professional skills and moral integrity” while maintaining a positive public image.

[…] The move comes after the high-profile arrests of various celebrities for drugs and soliciting prostitutes, including Li Dai­mo, Zhang Mo and Jaycee Chan, son of kung fu star Jackie Chan.

[…] As lawmakers reviewed the draft law, the media watchdog announced that it had set up a professional ethics committee to “guide organisations and people in the media to practice core socialist values”, Xinhua reported, adding that productions involving “tainted artists” would be ineligible for industry awards.

Commenting on the draft bill, Qian Wei, a cultural industry researcher at Shanghai’s East China University of Political Science and Law, said the legislation was a meaningful move to hold celebrities to account for their actions, but he had doubts about how it would be enforced. [Source]

Also see a report from The New York Times’ Kiki Zhao on new song-and-dance propaganda campaign in Hunan promoting the 12 “core socialist values.” The People’s Daily has also tweeted about the Hunan campaign:

At TIME, Hannah Beech puts the draft law’s attempt to regulate morality into the historical Chinese context of using the arts to serve the socialist cause (a Maoist technique recently revitalized by Xi Jinping), noting the cross-border complexity of this policy goal as the relationship between Hollywood and China grows increasingly symbiotic:

The proposed law also takes aim at a booming Chinese postproduction business that helps Hollywood churn out films more cheaply with local labor. Chinese companies will not be able work on foreign films that could “harm national dignity and interest of China, cause social instability, or hurt the national feeling.” Now that Chinese investors own Hollywood studios and cinema chains, the draft law could potentially hinder the global film-production process.

The Chinese Communist Party has long used the arts to promote socialist values. Chairman Mao Zedong’s wife Jiang Qing, an actress, directed revolutionary ballets and operas. Peng Liyuan, the country’s current First Lady, was for many years far more famous than her husband Xi Jinping because of the patriotic fare she sang as a member of the People’s Liberation Army’s entertainment troupe. In 2014, President Xi decried artists who “are salacious, indulge in kitsch, are of low taste and have gradually turned their work into cash cows, or into ecstasy pills for sensual stimulation.”

[…] Monday’s meeting in Beijing was dedicated to encouraging innovation in China’s film world. But can communist apparatchiks deliver more than a commercially minded movie industry? Xi has grand ambitions for China’s culture. “Fine-art works,” China’s President has said, “should be like sunshine from blue sky and breeze in spring that will inspire minds, warm hearts, cultivate taste and clean up undesirable work styles.” That’s a lot to ask of any film, and recent efforts to inject communist values into Chinese movies have underwhelmed at the box office. “The government gets in the way at every step in China,” says Cain, of a film industry beholden to censorship and other official limits. “Your overriding concern is: ‘Am I going to be O.K.?’ You’re serving a taskmaster that trumps the audience. That doesn’t tend to make for great films.” [Source]

Also see an article from the China Film Insider explaining how the draft film law, along with a recently introduced tax rebate, may serve to favor Chinese entertainment firms and further limit foreign competition in the film industry. For a detailed overview of the China-Hollywood connection, including an explanation of the current film import quota system and its role in encouraging co-productions, see a recent CDT interview with UCLA’s Michael Berry.