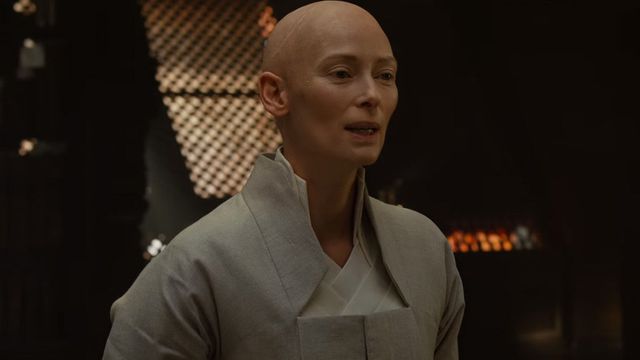 Two growing complaints against Hollywood—that it bows to China to secure access to its audiences, and “whitewashes” Asian roles—collided last week in an interview with “Doctor Strange” writer C. Robert Cargill. The forthcoming Marvel film has come under fire for the casting of British actor Tilda Swinton as “the Ancient One,” originally a 500-year old Tibetan sorcerer.

Swinton herself recently defended the decision, saying that in the film version, “it’s not actually an Asian character.” An official statement from Marvel elaborated that “the Ancient One is a title that is not exclusively held by any one character, but rather a moniker passed down through time, and in this particular film the embodiment is Celtic.” (The setting in which she appears in the trailer, though, looks more Himalayan than Scottish Highland.) Cargill—who noted that the decision on how to handle the character predated his own involvement in the film—went into further detail at DoubleToasted.com. He argued that “every single decision that involves the Ancient One is a bad one,” and “there is no other character in Marvel history that is such a cultural landmine and is absolutely unwinnable. […] Just like the Kobayashi Maru, it all comes down onto which way you’re willing to lose” Among the losses the studio reportedly refused to endure was alienating Chinese authorities and audiences:

The Ancient One […] comes from a region of the world that is in a very weird political place. He originates from Tibet, so if you acknowledge that Tibet is a place and he’s Tibetan, you risk alienating one billion people who think that that’s bullshit, and risk the Chinese government going, “Hey, you know one of the biggest film-watching countries in the world? We’re not going to show your movie because you decided to get political.”

Cargill’s reasoning is somewhat vague, perhaps in a further effort to tread lightly around Chinese sensitivities. The depiction of a Tibetan Ancient One within Tibet should not, in itself, have been provocative. The more sensitive issue would have been whether Tibet was depicted as Chinese territory, which the filmmakers could have chosen to leave ambiguous. If Chinese regulators had then demanded explicit recognition of the country’s territorial claim, however, Marvel would have been forced to either step on a far bigger political landmine than whitewashing, or else lose access to its largest market by far outside the United States. The interweaving of films in the franchise—12 to date, with at least 10 more on the way—could multiply the financial stakes. The latest Avengers movie, “Age of Ultron,” made $240 million in China alone, nearly a fifth of its global total.

Carefully vague though it may have been, Cargill’s explanation has antagonized some on Chinese social media. “Whitewashing is your business. Chinese consumers will not be scapegoated,” one retorted on Sina Weibo. “Are you kidding me?” asked another “This way of shirking responsibility is just too ridiculous.” “The excuse you are making is strange and wonderful,” added a third. “I can only do what I modestly can to decrease the box office results.”

Ensuring the film’s place in front of Chinese audiences was only one concern, Cargill continued. Others sprang from the project’s 50-year-old source material. The Ancient One, he argued, is “a racist stereotype,” concocted in the early ’60s by white American authors. The story in which the character is embedded reflects a similarly dated political outlook. Moreover, he added, some critics’ well-intended casting suggestions would only have inflamed the political sensitivities:

[…] The thing that makes me pull my hair out is, you know, some people are like, “well, why not cast Michelle Yeoh.” Well first of all, I’m like, Michelle Yeoh is awesome. I would love to make a film with Michelle Yeoh. If you are telling me that you think it’s a good idea to cast a Chinese actress as a Tibetan character, you are out of your damn fool mind and have no idea what the fuck you’re talking about.

[…] If we just kind of used a Tibetan actor and it was still an Ancient One but it was much less racist … or hopefully not racist at all … well, that’s the hope … people would still be “oh, it’s another ‘white guy goes to the Orient, adopts their ways and then comes back and is the great white hero’ story, it’s ‘Avatar’ all over again, it’s ‘The Last Samurai’ all over again,” so you’re going to get dinged on that. […]

And the thing is, and this needs to be said, is no disrespect to anyone (except the idiots out there who are going “this is the only way to do it”) … but everyone has the right to be upset, because the fact that this even exists, the fact that there’s a problem, that Marvel has a character like that who’s fallen into a weird place … […] It’s a really, really ugly piece of history that we wish there was an easy solution to, and there wasn’t one. [Source]

CLARIFICATION: that interview answer going around was to a question from a fan specifically about MY JUSTIFICATION, not Marvel's.

FOR THE RECORD: no one at Marvel or with the film ever talked to me about China, so contrary to headlines, I didn't confirm anything.

In a subsequent email to The New York Times, he added that:

[…] Those original statements were my own personal musings about a character, and although I worked on the film script, I came to the project after the first draft and was not part of any casting discussions or decisions so I had no right or knowledge to speak about them as if I was. It was a moronic decision, and worst of all, I embarrassed my friends and colleagues by coming across as if I were speaking for them. I was not. [Source]