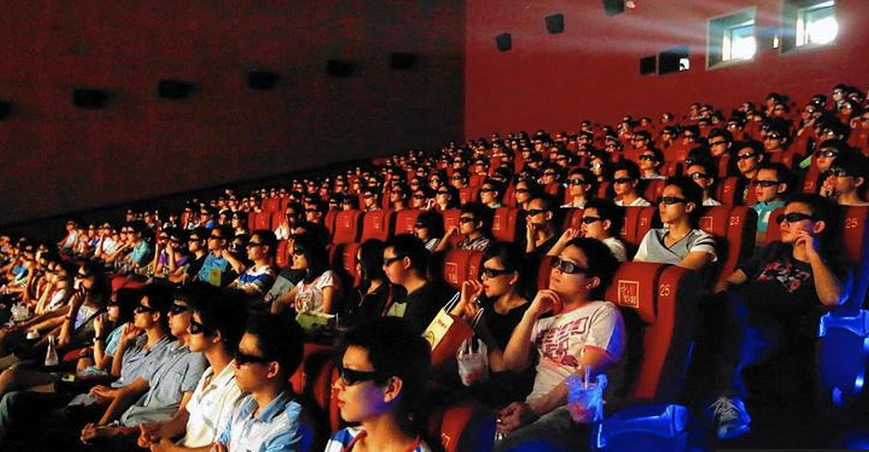 China currently has the world’s second largest film market (by total box office revenue), and some estimate based on recent numbers that it could overtake the U.S. by 2018. As China’s middle class has grown over the past decade, the number of cinemas in the nation has increased by more than 800%. Under Beijing’s current film import quota, those proliferating silver screens are allowed to show only 34 foreign films each year—a policy both political (allowing Beijing to deny entry to content not in line with Party values), and economic (bolstering the domestic industry by limiting foreign competition). As Hollywood studios see potential in China’s market but face the import quota, they have become increasingly willing to cater to Chinese censors to better their chances of making the cut, and to insert sometimes extraneous cultural references that appeal to Chinese filmgoers. At CCTV America May Lee looks at the deepening relationship between Hollywood and China:

Meanwhile, as China’s domestic film industry grows, Beijing is hoping that international interest in Chinese produced films could become part of its soft power strategy. Amid these trends, there has been an increase in China-Hollywood co-production agreements. CCTV America talks to Peter Shiao, founder of Orb Media Group—an L.A.-based firm that facilitates joint film production, financing, and marketing—about the future of increased China-Hollywood cooperation:

Co-production and joint funding can be mutually beneficial—Chinese investment can get an expensive project started and stimulate the foreign film industry, while at the same time allowing Chinese funders a learning opportunity and adding to Beijing’s soft power reserves. At Bloomberg Businessweek, Anousha Sakoui reports:

[…] “China is trying to learn why Hollywood is so successful,” says Stanley Rosen, a University of Southern California political science professor who studies the relationship between the mainland and the U.S. film industry. China, he says, wants to master the business “from the bottom up.”

Hollywood is happy to help. It needs the cash plus access to theaters in China, where the government limits the number of imported movies and controls how they are released. Such connections are crucial since China, projected to overtake the U.S. in box-office receipts by 2020, accounted for most of the growth in global movie ticket sales last year.

Over the past year, U.S. studios “are going to these big companies with single pictures and saying, ‘Would you like to invest?’ ” says Robert Cain, a partner at Pacific Bridge Pictures, a film producer and consultant. “They’re investing because the opportunity is now being presented, and that’s only a recent phenomenon.”

[…] Cain says China’s government is able to use its control over its lucrative home market to influence U.S. studios and exert soft power—the kind of cultural influence that’s made Hollywood a global ambassador for America. China Film invested in The Great Wall, a thriller starring Matt Damon and Willem Dafoe about an elite force making a last stand for humanity on China’s snaking barrier. It’s targeted for a November 2016 release by Universal. Says Cain: “On a broad scale, China is steadily gaining more and more influence in Hollywood, and you won’t see a Chinese villain probably ever again in a Hollywood movie.” [Source]

Despite the mutual benefits, co-production also comes with a host of challenges. Last month, the Los Angeles Times’ Richard Verrier reported on some notable film deals that unravelled:

While the entertainment industry eyes China as a source of capital and customers, interests there often approach the relationship with a very different agenda, according to studio executives and others who have sought partnerships in China.

Some investors are more interested in appearing to be in business with Hollywood than in putting serious money into deals, these people say — to boost their stock prices or profiles. (American studios also like to be seen to be doing deals in China.)

In other cases, entertainment industry leaders say, Chinese companies are looking to learn strategies and techniques to make their own film industry a stronger competitor.

[…] Whatever the reasons, Hollywood executives have learned to greet news of a partnership with China with a healthy degree of skepticism.

Co-production can also appeal to a foreign studio because, ​in some cases, the co-produced film is exempt from Beijing’s annual import quota, and a government certified co-production entitles the partner to a larger share of the box office revenue (up to 38%, while imported films are capped at 25%). However, obtaining that certification has since 2012 also required at least one-third of investment to be Chinese, Chinese actors to fill leading roles, and the filming of at least one scene to be in China. Recently, a Chinese industry insider hinted that more foreign films could be allowed in after the current policy expires in 2017; The LA Times’ Verrier last month reported skepticism about the validity of that rumor:

Despite deepening ties with Hollywood, China may not be ready to scrap an unpopular quota that restricts the number of foreign movies it allows into the country.

[…] “There seems to be an assumption that the quota would be lifted in 2017,” said Aynne Kokas, a professor and China expert at the University of Virginia. “It doesn’t seem like there is as much movement as that.”

[…] “We have this symbiotic relationship,” Kokas said. “How long the mutual accommodation will last is uncertain…. I see growth in the Chinese media and entertainment industry and not necessarily the parallel growth in Hollywood.”

Although the Chinese government wants to expand its cultural industries, including film, it remains wary of Western culture. Yet Chinese producers need Hollywood know-how to make movies that can do well globally, not just in China. […] [Source]

Updated at 13:30 PDT on October 7, 2015: The Guardian’s Phil Hoade profiles La Peikang, chairman of China Film Group Corporation, the state monopoly that approves and oversees all imported films and also finances, produces, and distributes domestic works. Hoade quotes La on China’s openness to foreign films relative to the past, his mission to increase film quality, and censorship:

The emails leaked from Sony Pictures in 2014 show, on La’s accession, the studio circulating a full briefing on the man to whom Hollywood now goes, cap in hand, to ensure its blockbusters gain entry to a box-office goldmine that has grown at least 30% year-on-year since 2010. Sitting with a translator and I in a spot outside the men’s toilets where we’ve sought refuge from the business scrum, La is quick to extend a hand to the studios: “Our government has introduced a lot of helpful policies so we can cooperate with film companies in the west and elsewhere.” He waits, with practised rhythm, for his translator to finish, then resumes. “We’re more open than in the past.”

Not open enough to respond later to my email about why China Film Co last month allegedly manipulated box-office receipts for its war movie Hundred Regiments Offensive. If the charge is true, it represents the kind of old-school communist book-cooking that a thriving film industry shouldn’t need. But the allegations highlight a wider issue: the ability of transitioning Chinese cinema to hold its own against foreign competitors (the government still enforces a summer blackout period on Hollywood films). Along with his unflappable bureaucrat’s mien, La says he differs from his predecessor in another respect: “In the past, we focused a lot on how many films we produced a year. But right now we’re trying to increase their artistic quality.”

But isn’t the government’s own censorship system – requiring scripts to be vetted for depictions of sex, violence or anything deemed damaging to national morale – one of the biggest obstacles to that? The translator laughs nervously as he puts that over, but Chairman La doesn’t blink. “The government tries to help our market grow, not put hurdles on the road of increasing quality. Actually, we are open to different genres and topics, but not stories that challenge our society or our law system.” […] [Source]

In the most recent episode of The Late Show, Stephen Colbert covered Hollywood’s desire to access the Chinese film market. “Well folks, I don’t know how to tell you this, but I’m in showbiz too, and clearly the future is getting the Chinese government to allow you into their market,” said the host as he introduced his new segment, “Pander Express”: