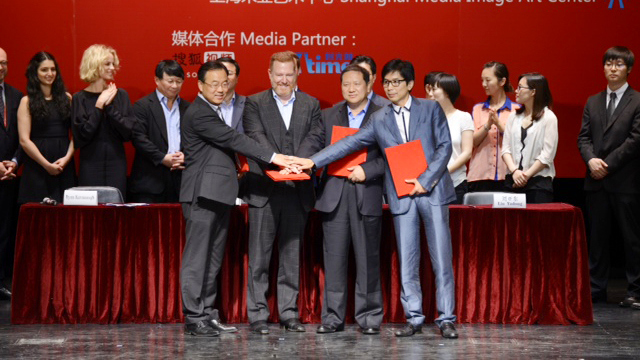 Hollywood-based film production, distribution, and promotion company Relativity Media—the same firm that found itself under fire in 2011 for cozying up to local officials in Linyi, Shandong while Chen Guangcheng was under house arrest nearby—announced a “strategic partnership with leading Chinese media company” (see Relativity’s press release). The LA Times reports on the breadth of Relativity’s new Chinese deals, and the benefits they could bring to the company, its new (state-owned) partner, and Beijing’s overall soft power strategy:

China’s box office has been growing rapidly and is second only to the U.S., but the country has struggled to find an audience for its own films overseas. Promoting its “soft power” through cultural exports is a priority for the country’s leadership, but China has yet to produce anything close to a Hollywood-type global blockbuster.

In addition to distributing Chinese movies stateside, Relativity will help promote Chinese titles at international film festivals and will receive a fee from the state agency, China Film Promotion International.

[…] In addition to expanding its release slate, Relativity said the new investments would allow it to invest more in digitally focused content and distribution channels, including mobile. The company said it also intends to acquire film and TV libraries, TV production and distribution networks, and advertising and branding agencies.

Meanwhile, Relativity said it was entering into a “strategic advisory agreement” with Industrial and Commercial Bank of China. In remarks to the media at the festival, Kavanaugh indicated that the arrangement was a preparatory step for an eventual move to take the company public. [Source]

This new production and financing alliance will allow distribution and market access perks to parties on both sides of the Pacific. Deadline Hollywood reports that Relativity will use proceeds from the Chinese investments to reach a standing goal: release more than 15 titles in China, a country where only 34 foreign films can premier each year, by 2015/2016. (Recent rumors have hinted that the import quota may be raised by 2017.) For more on the changing relationship between Beijing (who exercises tight control over the film industry) and Hollywood (who desires access to the size and impetus of China’s market), see “Hollywood Kowtows to China,” via CDT.