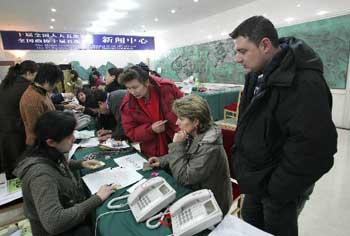 From China Daily via Xinhua:

Overseas journalists covering the annual sessions of the NPC and CPPCC can for the first time contact and interview lawmakers and political advisers “directly,” thanks to a newly implemented regulation that grants them more freedom in reporting the events.

The new regulation, which took effect on January 1, gives foreign reporters free access to report from China in the run-up to, and during, the 2008 Olympic Games.

The regulation also allows foreign reporters to interview and report on all aspects of China, not just the Olympics.

In line with the new regulation, foreign reporters covering the two sessions can interview NPC deputies or CPPCC members directly, if those being interviewed approve, according to the media centers of the two sessions. [Full Text]