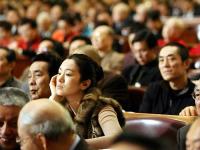 From China Daily via China.org:

She’s known the world over for her stunning looks and acting prowess. But she revealed another, and a much more serious, side of her character yesterday….

“Things will become really terrible if we don’t take environmental protection more seriously,” said Gong Li, who made news for all the wrong reasons for her dresses in The Curse of the Golden Flower.

Talking to China Daily during a break in the Chinese People’s Political Consultative Conference (CPPCC) group discussion, Gong said she had submitted a proposal on environmental protection to the country’s top political advisory body….[Full Text]

Gathering of the Week: Stupid Sessions

Tibetan Delegates Wear Xi Badges “of Own Free Will”

Political Meetings Watched for Clues on Party Unity & Next Leaders