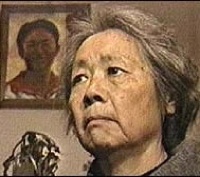 From VOA News: Tianamen Mothers demand truth of the 1989 massacre in Beijing: an open letter to the Chinese government asks for an open debate on the subject at next week’s annual meeting of the National People’s Congress.

In an open letter released by Human Rights in China the Tiananmen Mothers, a group of relatives of victims of the 1989 Tiananmen Square crackdown on the anti-corruption and pro-democracy protests, have urged the government to allow an open debate on the subject at next week’s annual meeting of the National People’s Congress and “reveal the truth” about the protests and their bloody conclusion.

“A just and reasonable resolution of the June 4 question is an inevitable trend, and is what the people desire,” said the letter. “It has been nearly 18 years” and “the real story has yet to see the light of day,” it added.

The ‘Tiananmen Mothers’ are a group that includes 128 relatives of the victims of the June 4, 1989, Tiananmen Square massacre. On that day Chinese troops, backed by tanks, slaughtered defenceless protesters who had been in the streets of the Chinese capital for over a month demanding democracy and an end to corruption. [Full Text]