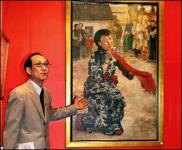 From Xinhua via China.org:

A masterpiece by prominent Chinese artist Xu Beihong (ÂæêÊÇ≤È∏ø) was auctioned on Saturday at a record 72 million Hong Kong dollars (about US$9.2 million) for a Chinese oil painting.

Sotheby’s had said the 1939 painting of an anti-Japanese street play, “Put Down Your Whip,” was expected to fetch at least 30 million Hong Kong dollars (US$3.8 million dollars).

The painting was bought by an anonymous collector over the telephone after competition from at least four other bidders. “This painting is of historic value because this is Xu’s only painting with the theme of anti-Japanese aggression,” said Lin….[Full Text]