An update on the June 4 classified ad in a Chengdu paper supporting the Tiananmen Mothers:

Li Zhaojun, deputy editor-in-chief of the Chengdu Evening News in Sichuan’s provincial capital Chengdu, and two other members of the tabloid’s editorial office had been dismissed, the source told Reuters requesting anonymity.

The newspaper and the Chengdu city government declined to comment. Mr. Li could not be reached. 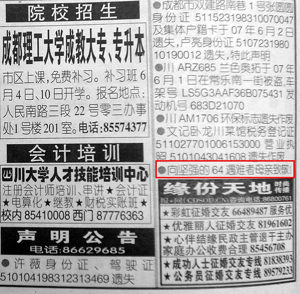 …Hong Kong’s South China Morning Post said on Wednesday a young female clerk allowed the tribute to be published because she had never heard of the crackdown.

She phoned back the person who placed the ad to ask what June 4 meant and he told her it was the date of a mining disaster, the Post said. [Full text]