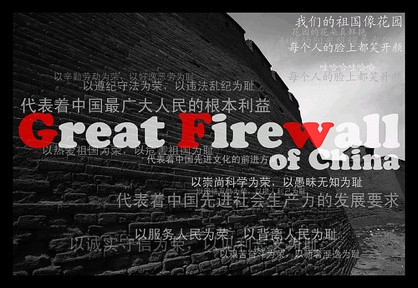 As part of the aftermath of Xiamen PX protests, US based photo sharing website Flickr has been filtered since June 7. Beijing-based blogger Keso writes an influential blog about Web 2.0 technology. He pointed out that this photo on Flickr is now blocked by the Great Firewall of China.

Here are translations of some of those Chinese characters on the wall:

Serve the people; never betray them

Represents the fundamental interests of the majority

— From lyrics of a Chinese schoolchildren’s song

There has been much uproar in the past couple days specifically over China’s blockage of Flickr. But as Keso points out, many other popular Web2.0 services like WordPress.com, Wikipedia, and Blogger have already been blocked. Not to mention tens of thousands of other sites and many keywords that trigger a meltdown of your internet connection.

Chinese netizens are getting less and less patient with this state of affairs: arbitrary blocking with no explanation, no accountability, no means of appeal, no recourse, nothing.