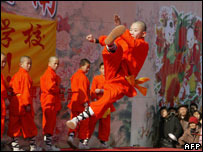 Think China’s art of the fake reached its height with fake eggs? Think again. From the BBC:

The Chinese authorities say they have foiled a plot to smuggle immigrants abroad disguised as martial arts performers from the Shaolin Temple.

Filmmaker Gives Voice to Acts of Rage in Today’s China

‘Kingdom’ Nabs Top China Box Office Opening Ever in US

The Smugglers’ Due – Alex Kotlowitz