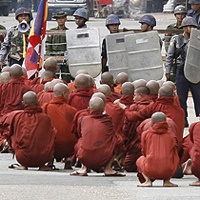 See No Evil, Speak No Truth

After decades of brutal military rule, Myanmar’s people have taken to the streets to demand democracy, and they are being mowed down. China, India and Russia have the means ” but apparently not the will ” to stop Myanmar’s vicious junta from murdering more of its citizens. The three countries regularly proclaim themselves world powers, yet they refuse to accept the moral responsibility that must come with that position.

China is Myanmar’s chief trading partner and protector. Many other countries, including the United States, refuse to do business with the regime, but India and Russia are comfortably making money off the generals and helping keep them in power, with arms and energy deals. So far, they all have refused to use that leverage ” a shocking demonstration of greed and political cowardice.

On Wednesday, Beijing ruled out calls for international sanctions and stopped the Security Council even from condemning the junta’s indiscriminate use of force against pro-democracy protests. On Friday, Russian President Vladimir Putin dismissed sanctions as premature and said he “assumed” the violence will stop.

…… China will host the 2008 Olympics, which it sees as a coming out party for its rising international power. Beijing’s rulers need to know that the world is watching to see whether it will now use its influence to stop the killing in Myanmar ” or again abdicate the responsibilities that come with real world leadership. [Full Text]

And here is the editorial on the Washington Post:

The Saffron Olympics – The slaughtered monks of Burma will haunt China.

By now China’s Communist rulers must have realized that one unintended consequence of hosting the 2008 Olympics is unprecedented global scrutiny of Beijing’s retrograde foreign policy. For decades, one pillar of that policy has been the cynical political and economic exploitation of rogue states that most of the rest of the world shuns — notably North Korea, Zimbabwe, Sudan and Burma. Under growing international pressure, and with the looming threat of a besmirched Olympics, Chinese policy is slowly changing. But not fast enough, as this week’s events in Burma demonstrate.

……the weakest response of all was left to China, which did $2 billion worth of business with Burma last year alone and is its principal supplier of weapons. China’s ambassador at the United Nations blocked a Security Council resolution condemning the crackdown. The strongest word Beijing has been able to cough up is “restraint.”

……China’s behavior is nevertheless a pathetically puny response to savage brutality by one of the world’s most corrupt and illegitimate governments. Burma’s generals might not take orders from Beijing. But the failure of President Hu Jintao‘s leadership to forthrightly condemn the repression has had the effect of giving the junta a green light. Burma’s saffron-robed monks will join Darfur’s refugees in haunting the Beijing Olympics — which are on their way to becoming a monument to an emerging superpower’s immorality.

China urges restraint from all parties in Myanmar on Xinhuanet.com

U.N. Envoy Travels to Burma for Talks on The Washington Post.

An Eye in the Sky on Burma on Time magazine. 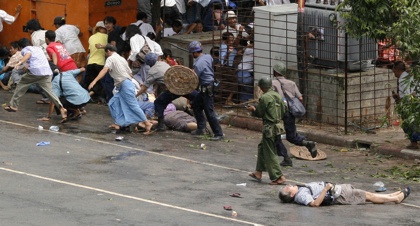