A Princeling of the People – Melinda Liu and Jonathan Ansfield 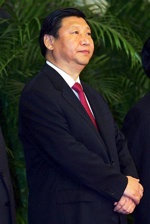 “China’s new heir apparent is a surprise pick, suggesting that ‘intraparty democracy’ is no joke.” From Newsweek International:

Not long ago, China’s Communist party would never have picked Xi Jinping as its next boss. For one thing, he’s a “princeling“”a derogatory term for the offspring of party leaders, who are resented by many Chinese because they’re thought to benefit from guanxi (personal connections) and to put on airs. For another thing, Xi is known for his free-market prowess, not necessarily his ideological purity. Accordingly, when his name first appeared in Party Congress ballots in 1992 and 1997 as a candidate for the Central Committee, Xi got low marks. But over time, his carefully cultivated down-home image began to win over top leaders. They were impressed by Xi’s agriculture background (he spent part of his teens on a farm) and the way he shunned Western suits and private cars for windbreakers and riding the bus. Xi seemed competent as well, with a solid record in every region he’d overseen. So by the time senior leaders held a secret poll shortly before this month’s 17th Party Congress, Xi, according to Li Datong, a former editor turned political commentator, “got the highest vote.” [Full Text]