Here is an interesting post via 24 Hours Online, about the life and dreams of an old rural guy who Laohu Miao met on his bike tour to Northern Shaanxi:

Mr Shi (Stone)’s given name is “life”, a surprising name. Usually, an 80-year-old country guy like him would have a name like “big harvest”. But Shi’s name sounds very westernized, and the meaning is sophisticated. Life is not just a big harvest, with plenty of food, but a big life, with big ideals and big dreams.

However, Mr Shi’s life is not that ideal.

Mr Shi’s hometown is called “Salt field”. That’s because there’s salt, dry salt, which looks like crystal lake shining in the sun. Mr Shi guided me around, while we chatted.

Soon he mentioned the pollution of the grasslands in his village. When he talked about this, his lips trembled and his voice rose.

“She looked fine and was having a meal. All of a sudden she screamed out because of a bad stomachache. She lay down on the bed. I took a short break and checked on her. Her nose was running and her mouth was open. I held her and did not know what to do…Then she passed away within just moments…” said Mr Shi. 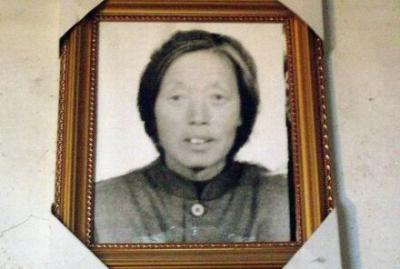 He said his wife’s belly was swollen after she died. It was just like the cattle who died with big bellies in the village. The reason was that the water they drank was polluted by the waste water running down from Dingbian (ÂÆöËæπ) town.

All the waste water, including human waste and industrial waste, was transferred through a huge pipe toward the south of the city, to the grassland where Mr Shi lives.

I told Mr Shi that the waste water should be recycled first.

“No!” Mr Shi almost shouted. “Doesn’t it cost a lot money to buy machines? Those jerks won’t do it.”

Mr Shi walked with me for three miles to show me a place. We walked though the dried desert that had some grass growing. Suddenly, there were dozens of small “lakes”, connected to each other like a necklace and extended for miles. (Photos below) 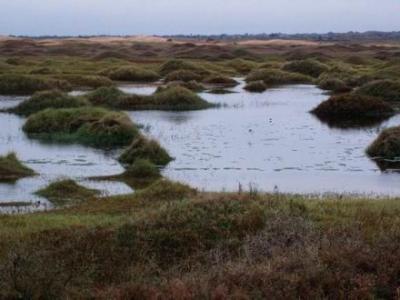 These lakes have been made by the waste water from the town, Mr Shi said. For years the lakes multiplied and reached out farther and farther .

“Someone’s house flooded and collapsed because of the waste water. Nobody is handling this. We villagers worked together and made a dam to prevent the floods. However, the water is still increasing. We don’t know who’s next to be flooded. Also the water flowed underground since it is the sandy desert. That’s why the wells in our village were polluted. Humans and animals can’t drink the water, as several have died from the disaster water.” 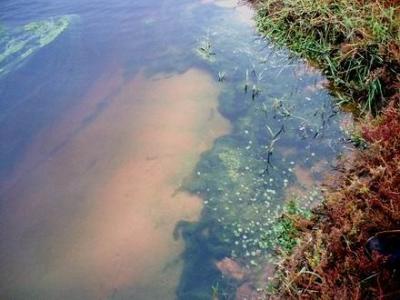 I said the villagers should go and find someone in charge.

“All bullshit. We did, but useless! It’s been eight years and no big guy came to see us. There was a reporter, one who wanted money from us…” said Mr Shi, who gave me a glance.

I saw it and immediately said, “I’m not a reporter. I don’t want money from you. I will ask about the pollution for you. I can’t guarantee there will be an answer. But I will do it!”

All of sudden, Mr Shi hugged me. Then he was shy and released his hand, but still spoke out, ” Oh, my heavens. It was right that I brought you here!”

Mr Shi said once a newspaper in the town asked the village for RMB40,000 yuan (USD5000) to expose the case and publish a full-page story. His son cut the price to RMB 35,000yuan ($4400). When he told the villagers he got scolded, as the poor village was not able to afford it. I said the town is a small place, and if the newspaper exposes it, the governors would be offended. “Yup, I knew it was cheating,” said Mr Shi. “The paper did not come in the end.”

That night, I was cleaning out the photos in my camera. Mr Shi was watching me sitting on his knees. I asked him to sleep but he wouldn’t. The second day when I was leaving I took some of the water from the well for an lab examination in Beijing for evidence.

When I walked with my bike to leave Mr Shi’s house, he asked all his family of seven or eight people to send me off. We walked together for several hundred meters.

“You’re a person who can do things. If you can do this for me, you’ll make my dream come true. If you want anything, just let me know. I’m not afraid of anyone. In the worse case If someone shoots me, I would just die. I’ve lived long enough. I have to appeal for justice against these jerks,” said Mr Shi.

Xi Jinping: Dynastic Heir vs. Man of the People