After Months of Silence, Veteran Journalist Speaks Out About the “Death” of an Independent Journal – David Bandurski 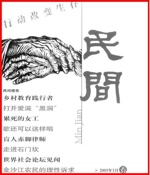 For two and half years veteran Chinese journalist and former CMP fellow Zhai Minglei and others went quietly to work on Minjian (民间), China’s first magazine telling the stories of grassroots activists working for the betterment of Chinese society. They had no political or financial ambitions, but were driven only, says Zhai, by their belief in the principles of civil society. After cooperating with authorities since July in an effort to save Minjian amidst a government crackdown on “illegal publications”, including the China Development Brief, Zhai has decided to speak out in an open letter explaining the circumstances surrounding Minjian’s “death.” [Full Text]