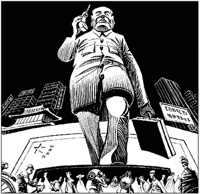 From The International Herald Tribune:

The view across the river at the skyscrapers of Pudong, where only muddy fields had existed 20 years ago, or the sight of jolly crowds of Chinese tourists carousing in the impossibly quaint streets of Lijiang in the hills of Yunnan, called to mind the once-startlingly revolutionary slogan that changed China: “It doesn’t matter the color of the cat as long as it catches mice.”

The phrase, attributed to Deng Xiaoping, was revolutionary because it directly contradicted Mao Zedong’s dictum “better red than expert.” The old devil Mao had unleashed countless ideologically driven campaigns that had brought China to its knees. Being red was what was important, not whether you knew anything.

What Deng did with his cat analogy was to reel back ideology in favor of practicality, to take human nature as he found it rather than trying to create a perfect Socialist man, culminating in another of his aphorisms: “To get rich is glorious.” [Full Text]

30 Years Ago: Leaders Meet with Students

Word of the Week: Core