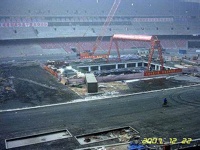 
There is no escaping China: Chinese art, Chinese exports, the Chinese economy, Chinese dollar reserves, Chinese growth. Next year’s Olympics in Beijing are focusing the world’s eager eyes on the Chinese capital. While London struggles to persuade a sceptical public about the need to spend more than £9bn, Beijing is spending more than double that. That construction costs there are around seven per cent of London’s gives you some idea of what is happening.

The Olympic site, in the north of the city, remains a dusty, lunar landscape, kept in a churning, swirling, animate state by an endless stream of bulldozers and trucks. It is hard not to keep snatching photos of the deliciously jarring juxtapositions of workers squatting to eat bowls of noodles in the shadows of the unimaginably complex structure of the Olympic buildings or of rickety handcarts bodged together from bicycle wheels and orange crates filled with high-tech components. A stroll around the site, or around the city’s Financial or Soho districts, impresses upon you that the theatrical statistics about the Chinese construction boom causing a worldwide shortage of steel and tower cranes, or about it consuming half the world’s concrete, are probably understatements.

The world’s great architects are queuing to poke the Beijing skyline. Here, among the city’s 8,000 building sites, they can realise their fantasies, impossible megastructures and awesome towers. But this is not the architectural adventure playground of Dubai and its skyscraper cities built on the tabula rasa of the desert: this is a thriving city, with a hugely complex history and structure, undergoing an adrenaline shot of money and change. Here the architects are feted and celebrated, their mad monoliths realised by cheap labour, the unattainable dreams of the west manufactured cheap in China. [Full Text]