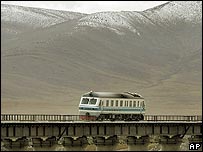 China’s high-speed, high-altitude railway to Tibet has carried troops to the regional capital, Lhasa, for the first time, state media has reported.

The Xinhua news agency cited unnamed sources in the People’s Liberation Army as saying the railway would become “a main option” for transporting soldiers.

Analysts say the move is likely to fuel concerns that China is using the rail link to tighten its hold on Tibet. [Full Text]

[Image source: The railway snakes for 1,140km across ‘the roof of the world’, from bbc.co.uk]