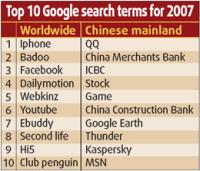 “Sex” was the keyword most frequently used by Internet users on Google in Egypt, India and Turkey, the search engine giant said a couple of months ago. But on the Chinese mainland, it was money and technology that took the honors last year, according to a list released by Google China on Tuesday.

Four of the top six were wealth-related: Three banks and “stock”. China Merchants Bank, Industrial and Commercial Bank of China and China Construction Bank, ranked second, third and sixth, all having listed in 2006 and proving a big draw for investors….[Full Text]