Editorial: Taking a Walk In Order to Meet a Mayor That Can Be Persuaded – Southern Metropolis Daily 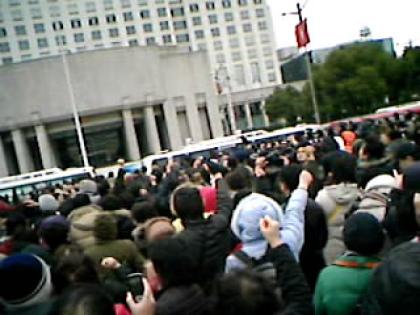 Editorial: Taking a Walk In Order to Meet a Mayor That Can Be Persuaded

May 2007, bright sunshine on Ludao island, but citizens in Xiamen were worried for their hometown. Smokestacks will soon replace green trees, poisonous gas will soon be in the clear sky, PX will turn Ludao island into a bonsai tree in a chemical factory. This was a project approved by the mayor, but citizens in Xiamen had their own opinions. Would they be able to find a mayor who could be persuaded? Citizens in Xiamen were not that confident, but they certainly made the effort. Let’s collectively take a walk, maybe we will meet a mayor who listens. Xiamen people are fortunate, they finally won glory for their city, together with a mayor who could be persuaded.

People in Shanghai also want to meet their mayor. Two days ago, the plan for the western extended line of the Maglev project began to be publicized. In order to peacefully express themselves, residents along the line came to People’s Square and expressed their opinion about Maglev line passing through their own neighborhood using the method of “taking a walk” and “shopping.” Citizens say: this is one way to express opinions. Officials say: the plan is still just a draft; it is possible that it will be adjusted again. They urged citizens to express their opinions legally and rationally. There was a tone of warning, but it was still calm enough. So far the communication between officials and citizens has been as calm as a greeting during a walk.

Taking a walk, just in order to meet a mayor who can be persuaded. Those citizens who were taking a walk in Xiamen and Shanghai share the same motivation and same rationale. This motivation can certainly be put under the sunlight. How long has it been, that a mayor cannot be persuaded? And how long also has been since the public became hard to persuade? …… This non-persuadable arrogance of power, where does it come from?

From a blog post entitled : “Announcement to all residents along the Maglev line”

Mr. Zhou [a member of Shanghai government’s evaluation team] mentioned ICNIRP (International Commission on Non-Ionizing Radiation Protection) and said that this organization has reported that this is harmless and that is harmless. This is really strange. We ordinary citizens can also read English. What we have seen in ICNRP documents details all kinds of harmful effects of electric and magnetic radiation. A lot of research, including biological research and volunteered human subjects research, all showed enormous risks in such an environment.

We do not doubt that you have “experts”; it is too easy for you [the government] to find an “expert”. When a Jilin factory exploded and caused pollution in Songhua River, so many residents had to be removed, were there some “experts” shamelessly telling the media that the “only products of the explosion are carbon dioxide and water”? This is an insult to all citizens. It is a shame for all intellectuals.

From an article on EastNet, the Shanghai government’s official media site:

There are people who want Shanghai in chaos. Now, some foreigners are playing up the Maglev project, spreading some malicious rumors. Some domestic people also follow them to make a fuss. Goodhearted people must not to fall into their trap.