Darfur, A Reason To Say No? 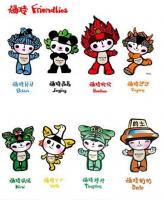 From The Global Voices Online, translated by Bob Chen:

Mr. Spielberg might have piqued a large group of people, including not only the authority, but many common Chinese as well.

…In 163.com people left over 1500 comments after the report of Spielberg’s withdrawal..

Spielberg’s behavior is immature, and unwise. He linked himself to a power (U.S), and did something against Olympic spirits. Ridiculous it is. Please, Mr. Spielberg, don’t be so hotheaded to act as a tool of some interest group.

Fine, just drop out, nothing big.

How much dose Spielberg value? Does he really think America attacked Iraq to liberate Iraqis? For oil only! Only allowing itself to play the game but keeping all others out is typically a Hegemonism.

Workers In Sudan Not Yet Freed (Updated)