Playing in China, Chipping at a Wall

Baseball promoters are the latest sports enthusiasts to try to break into the China market. The New York Times reports on the first Major League Baseball team played in China, between the Los Angeles Dodgers and the San Diego Padres: 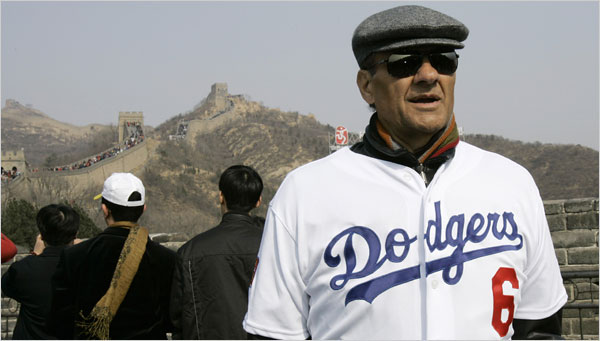 Dodgers Manager Joe Torre, who has seen the Green Monster in Boston many times, visited the Great Wall of China on Friday.

…Most of the spectators were Chinese citizens seeing major league baseball for the first time. Some had never watched the sport live, at any level, because it is so rare. About 150,000 people play baseball in China, which has a population of 1.3 billion and has about 100 official fields, Major League Baseball officials said.

Outside the stadium Saturday, dozens of passers-by stopped to stare through the fence to get a glimpse of Wukesong field, one of the few in China with a grass infield. Some said that even if they had the money to attend the game — ticket prices ranged from $7 to $180 — they would have passed on it, calling the game incomprehensible and boring. Gong Wan Ming, a retired chemist who was staring at the stadium from a nearby bus stop, said he considered table tennis much more interesting because it is fast-paced and requires cheaper equipment.

Dodgers Manager Joe Torre, who arrived in Beijing on Thursday, said it would take time to chip away at that mentality.

Exporting a Sport to China: How Do You Say Zamboni in Mandarin? – Dave Caldwell