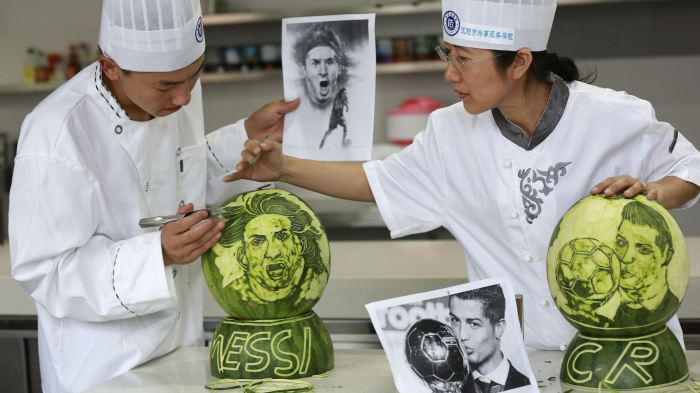 As 32 countries compete in the World Cup games in Brazil, millions of Chinese soccer fans are enthusiastically staying up all night to watch. Official media has blamed one death on World Cup Fever, and fans who can’t make it to the office following a soccer bender can download doctor’s notes excusing them, courtesy of Taobao, or purchase insurance for World Cup-related drunkenness or hooliganism.

While China has legions of soccer fans, the country of 1.4 billion has yet to field a winning team of 11 men who can compete internationally. From Chris Luo at the South China Morning Post:

China’s dreams of going to Brazil were dashed in 2011 when they failed to make it through qualifying, despite spending big on Spanish coach Jose Antonio Camacho.

And their fortunes have not improved in the past few years, culminating in an embarrassing 5-1 home defeat by Thailand in June last year which sent their world ranking to all-time low of 109.

The China Football Federation has hired a procession of seven different head coaches, from five countries – the latest being Frenchman Alain Perrin, whose appointment was announced in February.

“Today we change our coach, tomorrow officials, the day after that our playing style, and after that, the players … I don’t see any planning,” retired Dalian forward Hao Haidong said of the frequent changes in the national team. “It couldn’t possibly get more absurd.” [Source]

Hannah Beech at Time Magazine tries to solve the eternal mystery: Why is China so horrible at soccer?:

There are many reasons ascribed to the dire state of Chinese men’s soccer. (The women aren’t bad at all.) In places like Brazil, kids seem to grow up with footballs attached to their feet. In China, by contrast, there’s no tradition of kiddie soccer fun, even if some patriots insist the sport was actually invented in the Middle Kingdom. Nor is there a network of suburban children’s leagues, as in the U.S., because after-school hours in China tend to be dedicated to study, study, study.

That hasn’t stopped millions of Chinese from enjoying the sport, at least as spectators. President Xi Jinping, for one, is a self-avowed soccer fan. China does have a domestic soccer league but its history of bribery and match-fixing makes, well, even FIFA look clean. (There are attempts to professionalize the Chinese soccer league, along with major investments from Chinese billionaires, but that’s a matter for the future.) As for the Chinese national side, it has only ever made the World Cup finals once, back in 2002, when even the coaching of journeyman pro Bora Milutinovic couldn’t coax the squad to net a single goal. In international matches over the past year, China has succumbed to the likes of Uzbekistan, Iraq and a Thai team padded mostly with youth players. (That last defeat compelled irate Chinese fans to riot.) [Source]

In an effort to change the history of Chinese soccer, authorities and investors are putting huge amounts of money and resources into the game. Samuel Chi reports for The Diplomat:

It appears that finally China is doing something about this lack of soccer prowess.

A new youth soccer academy – reputedly the largest in the world – opened in Guangzhou in 2012 with the specific aim of identifying and training promising footballers at an early age, much as it’s done with selected Olympic sports.

The academy is founded by Xu Jiayin, a construction magnate who also owns the Guangzhou Evergrande club team. Spanish coaches, through a partnership with European champion Real Madrid, have been imported as instructors.

“I don’t know if China can become world champions but that is what we are aiming for,” Sergio Sestelo, a retired Spanish striker turned Chinese youth coach told The Telegraph. “There are lots of football players because this is such a big country and our job is to track down talent wherever it is and work with it so that one day China can become No. 2 in the world … after all, Spain will always be No. 1.” [Source]

Despite the dire condition of soccer in China, real estate developers in particular are eager to put their money in local club teams, though that may be changing as the property market cools. Daniel Ren at the South China Morning Post reports:

Property developers have been especially keen to jump on the football bandwagon in order to use clubs as promotional vehicles to boost home sales. The owners of nine of the CSL sides are developers, including Greentown China and Greenland, while a further five teams have been invested in by companies in property-related businesses.

[…] Guangzhou Evergrande became a source of national pride after winning the Asian title and spawned imitators including Shandong Luneng and Beijing Guoan, which each shelled out several hundred millions of yuan to sign world-class coaches and players.

“Chinese football is overheated,” said Liu Jingdong, chief technology officer with online football consultancy huanhuba.com “It’s foreseeable that none of the clubs will be able to sustain their massive investments in the coming years.”

It is an open secret that the extravagant interest in football has a political ring to it. President Xi Jinping is a die-hard soccer fan who has said he dreams of a strong national team. [Source]

Wei Gu at China Real Time reports that Chinese soccer is still seen as a worthwhile investment, and many of China’s billionaires are still choosing to spend their money on clubs:

Although a majority of Chinese soccer clubs are struggling financially, it is still possible to earn a return that beats that of real estate and even e-commerce. Last week, Alibaba Group Holding Ltd., led by founder Jack Ma, paid 1.2 billion yuan ($193 million) for 50% of the Guangzhou Evergrande soccer team. For property tycoon Xu Jiayin, whose Evergrande Real Estate Group EGRNF +4.65% bought the then-struggling team for 100 million yuan in 2010, the deal means a return of 23 times over four years, or an annualized return of 120%.

There are other benefits. A soccer team can be a powerful marketing tool. As in most of the world, soccer in China has the highest marketing revenue and most TV viewers of any sport. Soccer matches accounted for half of all the sports games broadcast on China Central Television in 2013. Investments in a club help build government relations, because Beijing is keen to promote sports.