Although Qingming jie is an ancient Chinese holiday to commemorate the dead, it was only last December that the Chinese government made Qingming an official holiday. From China Daily: 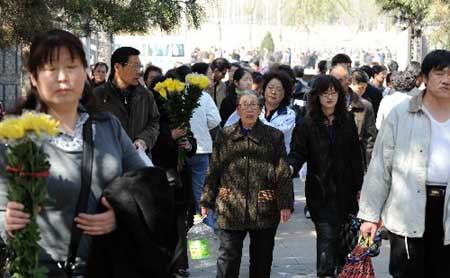 People are walking to a cemetery in the west of Beijing on Friday, April 4, 2008. The Chinese traditional Qingming Festival falls on Friday this year, which is the occasion for Chinese people to pay respect to past ancestors by cleaning their graves, presenting offerings of food, and burning joss paper. [Xinhua]

Some 600,000 people visited graveyards in the suburbs of Chinese capital Beijing on Friday, about triple last year’s figure of 189,000, according to official statistics.
On December 16, the State Council (cabinet) revised the nation’s official holiday schedule to add three traditional festivals — Qingming, Duanwu and Zhongqiu — in response to public calls. It also changed the length of other holidays.

The holiday marked on Friday was Qingming, or grave-sweeping day.

The change was intended to allow more people to pay their respects to deceased relatives on what would otherwise be a workday like Friday. No national figures on this year’s tomb visits were immediately available. 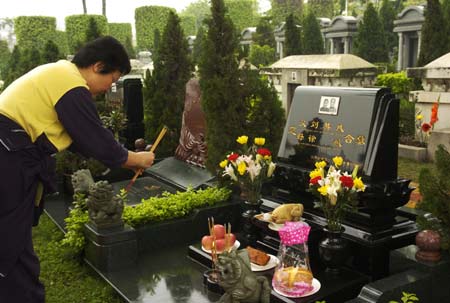 A citizen mourns her relative in a cemetery in Guangzhou, capital of southern China’s Guangdong Province, April 4, 2008. The Chinese Qingming Festival, a day two weeks after the vernal equinox, is also called the Tomb-sweeping Day, when Chinese people usually mourn their deceased relatives, pay homage to martyrs and sweep the tombs of the departed. [Xinhua]

Qingming Jie: With No Body, How to Mourn?

A Mongolian Shaman in Atheist China