Qingming Jie: With No Body, How to Mourn? 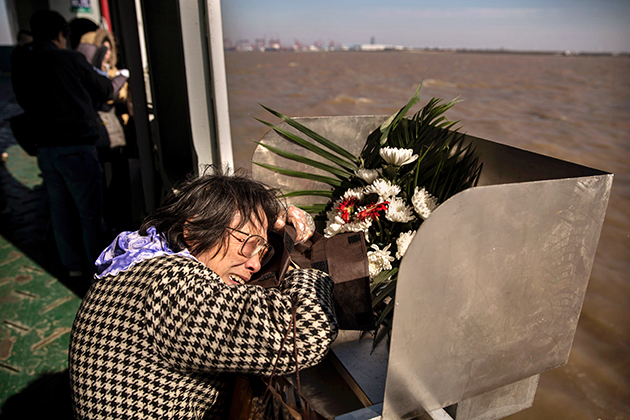 Saturday marks Qingming Jie, or Tomb-Sweeping Day, when families traditionally pay respects to the dead. Yet in China’s crowded cities, space for graves is at a premium, and some municipalities are offering incentives for burials at sea. Yet the idea has yet to catch on in a country where human burial is an important tradition. Bruce Einhorn at Bloomberg/Businessweek reports:

According to the country’s official English-language newspaper, local governments are encouraging people to scatter ashes of loved ones in the waters off China’s coast. “In cities such as Beijing and Shanghai,” the report notes, “governments are now offering free sea burials or cash subsidies to families.”

This isn’t the first time the Chinese media has touted the wonders of forgoing land burials. Two years ago, for instance, China Daily reported on efforts by Shanghai’s city government to encourage burials at sea to save money and space in the crowded metropolis. “Those opting for burial at sea will save 1 square meter of land in Shanghai, and that would cost about 24,000 yuan [almost $4,000] if it was a burial plot,” the city’s director of funeral management, Lu Chunling, told the newspaper at the time.

Still, it hasn’t quite caught on. Beijing has been promoting burials at sea for 20 years, but in 2013 only 1,200 families chose the option. Wang Dedong, the director of the Beijing Funeral Service Center, is nonetheless optimistic there will be more takers, telling the China Daily that the number of sea burials from the city is expected to double this year.

For migrants and others who are unable to return home for the holiday, savvy entrepreneurs are trying to cash in on tradition by offering their tomb-sweeping services through online stores. And for some, traditional offerings of paper money and other goods are being replaced by fake iPhones and other electronic items.

For the families of passengers on Malaysia Airlines flight 370, this Qingming Jie brings new challenges as they are unable to mourn as they still don’t know where their loved ones died. Didi Tang at AP reports:

Farmers here scratch out a meager existence. Posted in the village and surrounding hamlets are signs advertising agents who arrange work overseas, with the promise of higher wages.

“We don’t know what we are going to tell our mother this year,” said second son, Li Luxin, his brows furrowed as he sat on a plank bed in a Spartan room with a cement floor.

On Tomb-Sweeping Day, families typically visit the ancestral burial plot to clean the graves and present offerings of fruit and burn paper money. Some set off firecrackers for good luck and to drive off evil spirits. Such traditions are strong in rural areas, though they are falling by the wayside as people migrate to the cities.

The Chinese believe the body to be the carrier of one’s soul, said Han Gaonian, a folklorist at Lanzhou-based Northwest Normal University. “If you have the body, then the soul has a place to be,” he said. [Source]