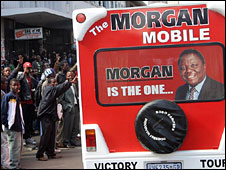 Earlier this week, the U.N. Security Council declared that a fair presidential vote in Zimbabwe is impossible because of a “campaign of violence” waged by President Robert Mugabe’s government in the run-up to the election. This marked the first time that the three traditional obstacles to Security Council action on Zimbabwe – China, Russia and South Africa – have supported such strong criticism. However, China and South Africa continue to resist support for economic sanctions.

China’s role in Zimbabwe has long been controversial and is often cited as a dubious example (along with Sudan) for China’s official policy of “non-involvement” in internal affairs when dealing with foreign nations.

The Chinese government has had friendly relations with Zimbabwe since 1980, when it and Mugabe, who led the newly independent state and is now clinging to power, shared much the same Marxist ideology. Zimbabwe’s own “Look East” policy in recent years has almost entirely focused on China, and China in turn, through its seat on the UN Security Council, has mostly provided diplomatic protection whenever needed.

Yet, the economy in Zimbabwe has been on the brink of collapse for years with inflation rising this month to 2 million percent according to unofficial figures and predicted to reach about 5 million percent by October barring any drastic measures to slow the rate of inflation. With massive poverty, food shortages, violence, suspension of the operations of humanitarian organizations, and a growing refugee stream, the crisis in Zimbabwe has reached the boiling point.

For now, most of the international pressure is on President Thabo Mbeki of South Africa, which along with China, is Zimbabwe’s largest trading partner. Just as there appears to be no resolution of the political crisis in Burma without China, there will likely be no improvement to the current situation in Zimbabwe unless South Africa plays a more constructive role. Yet so far, President Mbeki’s policy of “quiet diplomacy” has been largely unsuccessful in mediating between Mugabe and Tsvangirai and bringing an end to the crisis in Zimbabwe.

In the past, China’s economic and military support of the Mugabe government and its scores of human rights violations has often been the source of forceful criticism. Interestingly, international media coverage this past week of Mugabe’s re-election bid and the strong democratic support in the country for opposition candidate Morgan Tsvangirai, has largely kept the focus off China’s potential role in bringing an end to the conflict.