Though many thought detention centers for petitioners disappeared in China in 2003, Xu Zhiyong, a professor at the Beijing University of Post and Telecommunications and citizen journalist, has discovered they’ve merely gone underground.

On Sept. 21, 2008, Xu visited one of Beijing’s black jails after receiving an SMS message from a detainee inside the jail. (See CDT’s post from earlier last week on the topic.) 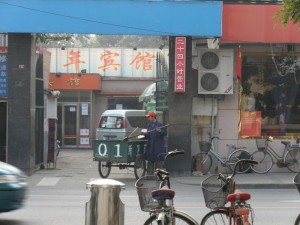 The Youth Hotel in Beijing: Guests go in, but they can’t come out.

When Xu arrived at the jail, he confirmed that the petitioner who had sent him a text message was in fact there. When he tried to get her released, he was beaten up. This translation, of his blog post about the incident, from Black and White Cat:

Very quickly, six or seven men rushed out around me and one of them reached out to grab my camera. The bare-chested guy suddenly rushed up and punched me in the chest, acting like a crazy devil and carrying a chain-lock.

I was very calm and submitted to their insults and occasional blows. At one point they wanted to drag me into the black jail, but they were stopped by their boss. When they’d spent all their aggression I said, “Can I go now?” They said no. Then they must have thought of something because they let me go. As I was leaving, I looked back and said “You’ll regret what you did today, whether it’s because you’re punished or because of your conscience.”

I will go back. This isn’t meddling in other people’s business. Black jails are a tumor on Beijing. They’re a tumor on China. In the broad light of day, that there should be such dark and ugly corners. As a Chinese man, I have a duty to rise up in indignation.

Xu returned to the jail, this time with a journalist friend. (Again, translated by Black and White Cat):

Before I reached the entrance to the black jail, four or five guards were already waiting. As soon as I got close, they demanded to know what I was doing. I said I was looking for someone. They told me to leave right away. One of them, wearing a red jacket, looked familiar. If my memory is right, this person is Deputy Director Liu Fengxiang of the Kaifeng Bureau of Letters and Visits. Three years ago he and a group of other people picking up petitioners beat me up in an alley in front of the State Bureau of Letters and Visits. I hadn’t thought I’d bump into him here. I said, “You’re illegally detaining petitioners. It’s illegal.” Director Liu said, ” Who says we’re detaining people? They’re all here volutarily.” I said, “Well, for example, is Wang Jinlan voluntary?” He said, “How do you know she’s not?”

I fished out my cell phone and was about to call Wang Jinlan who was locked inside. Director Liu snatched my phone. A fist hit my face and he yelled at me to fuck off. He said, “This is government business. It doesn’t concern you.” I later learnt that Director Liu has been the fiercest in beating petitioners. Many petitioners are afraid of him and they all know the guards all call him “Director Liu.” I suppose this is the only kind of person from the Bureau of Letters and Visits who’s suitable to come and work here. 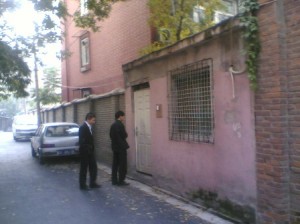 Xu Zhiyong and journalist Guo Jianlong near the black jail.

This time, he managed to get the petitioner who had contacted him via SMS out of the jail. According to Xu:

There are at least four black jails in Beijing where Henan province locks up petitioners: the Youth Hotel, the Fenglong Youth Hostel, the Juyuan Hotel and the Jingyuan Hotel. These black jails are just like the custody and repatriation centers of the past and they’ve become an industry. If we take the Youth Hotel as an example, the general situation is this: the man surnamed Liu and another surnamed Yin rent a room from the Youth Hotel. They employ some hired thugs and they’re entrusted by the Henan representative office in Beijing to grab petitioners from the Jiujingzhuang shelter and bring them here. The county governments come and pick them up and pay 150 yuan a day for each person.

Here is an audio recording by citizen journalist Zhou Shuguang (Zuola) of an altercation that broke out during another trip to the jail (via Global Voices) on Oct. 5, along with journalist Chen Er (Doubleleaf). The event was reported in real time using Twitter.

On Oct. 14, Isaac Mao wrote on his blog that Zhou’s and Chen’s visit to the black jail proves the transformative power of social media in China. “There are lot of things that go on that we don’t know about in China,” he writes, “but the only way we’re going to have a bright future is if citizen all over share information.”

For more translations of blog posts from the multiple visits to the black jail site in Beijing, see Meng Zhang’s translations at Global Voices.

Also, see this 2005 report from Human Rights Watch on the violence and intimidation used against petitioners.