CDT Bookshelf: Capitalism with Chinese Characteristics: Entrepreneurship and the State

The Cambridge University Press offers a summary of Yasheng Huang’s new book, Capitalism with Chinese Characteristics: Entrepreneurship and the State.

Huang, a Professor at the Massachusetts Institute of Technology (MIT), argues that China’s exceptional growth is more controlled by the state now than in the 1980s.

“This book presents a story of two Chinas – an entrepreneurial rural China and a state-controlled urban China. In the 1980s, rural China gained the upper hand, and the result was rapid as well as broad-based growth. In the 1990s, urban China triumphed. In the 1990s, the Chinese state reversed many of its productive rural experiments, with long-lasting damage to the economy and society. A weak financial sector, income disparity, rising illiteracy, productivity slowdowns, and reduced personal income growth are the product of the capitalism with Chinese characteristics of the 1990s and beyond. While GDP grew quickly in both decades, the welfare implications of growth differed substantially. The book uses the emerging Indian miracle to debunk the widespread notion that democracy is automatically anti-growth. The single biggest obstacle to sustainable growth and financial stability in China today is its poor political governance. As the country marks its 30th anniversary of reforms in 2008, China faces some of its toughest economic challenges and substantial vulnerabilities that require fundamental institutional reforms.”

The Economist also writes a longer summary of the Yasheng’s main arguments, stating:

“Original research on China is rare, largely because statistics, though plentiful, are notoriously unreliable. Mr Huang has gone far beyond the superficial data on gross domestic product (GDP) and foreign direct investment that satisfy most researchers. Instead, he has unearthed thousands of long-forgotten pages of memoranda and policy documents issued by bank chairmen, businessmen and state officials. In the process he has discovered two Chinas: one, from not so long ago, vibrant, entrepreneurial and rural; the other, today’s China, urban and controlled by the state.”

William Kirby, a Professor of Business Administration at the Harvard Business School, writes the following review published online in the Cambridge University Press:

“Yasheng Huang is an insightful scholar of China’s political economy. In this important book, he shows how China’s rural economy took off in the 1980s, led by ‘township and village enterprises’ that were essentially private, only to be ignored in the 1990s by state-led development that focused on urban regions such as Shanghai. The ‘Shanghai miracle,’ he argues – and as any businessman who has worked there knows – was not the simple triumph of capitalism, but of a stronger and more intrusive (and effective) state. If one wants to understand the policy origins of China’s growing divide between rich and poor, urban and rural, one need look no further than this book.”

An 10 page excerpt from the book can be found at Capitalism with Chinese Characteristics. 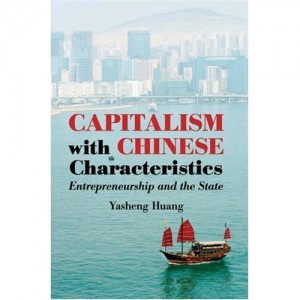