In light of the recent financial crisis, it remains largely ambiguous as to how a Western-originating credit crunch will impact Chinese financial health.  A convenient starting point, however, is in understanding how China’s sovereign wealth fund is exposed.

An article from the Financial Times reported:

When Lehman defaulted, the total amount of CDS on its debt was unknown. Estimates suggested that as much as $400bn might have to be paid out. That would have had the potential to cripple even the biggest banks, and may have added another element of fear to already panicky markets. While banks could work out their own exposure, neither they nor regulators could be sure what other banks owed.

On the other hand, the basic reason why Bear Stearns was spared bankruptcy by the government was described by Money Morning:

What is happening in both the stock and credit markets is a direct result of what’s playing out in the CDS market. The Fed could not let Bear Stearns enter bankruptcy because – and only because – the trillions of dollars of credit default swaps on its books would be wiped out. All the banks and institutions that had insurance written by Bear would not be able to say that they were insured or hedged anymore and they would have to write-down billions and billions of dollars in losses that they’ve been carrying at higher values because they could say that they were insured for those losses.

Both the Lehman and Bear Stearns cases and the bailout of AIG, for that matter, have broader implications for the global economy, as the credit default swaps (CDS) market is estimated to be roughly as the global economy’s GDP.  An article from the New Yorker draws the comparison:

Maybe most of these contracts are sound, or balanced out in ways that don’t create huge systemic liabilities–let’s hope so. Published estimates of the nominal value of all credit-default-swap contracts in the world today are in the range of $55 trillion to $60 trillion. So here is a global private market whose products, combined, have a nominal value roughly equal to the total size of the world economy’s output in a year, and apparently no one in any government knows the full market’s shape, distribution, or true vulnerabilities. 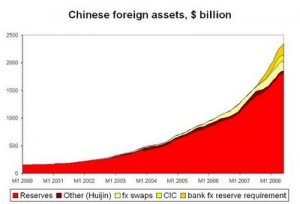 How to summarize China’s exposure to this derivatives-based counterparty risk?  Indeed, little has been written in direct response to this issue, though a derivatives regulation has tightened, as this CDT post reports.  But, for the most part, recent news on China’s exposure to a “Western” financial crisis is typified by asset recoupment stories like Chinalco and the China Investment Corporation and diminished asset values in Blackstone and Merrill.  Short of describing such a complex and indirect relationship between derivative speculation and Chinese risk assessment, the apparent reasons for China Investment Corporation’s most recent acquisition in U.S. financial sector do not bode well, as the RGE Monitor’s Brad Setser wrote in a December 2007 posting:

It now seems likely – despite protests to the contrary (“The deal was struck over a matter of months rather than a few weeks”) – that the CIC’s decision to invest in Morgan Stanley wasn’t entirely the product of a careful deliberative process.   Tan Wei reports that the CIC jumped on the Morgan Stanley deal after the China Development Bank (itself soon to be recapitalized by the CIC) missed out on a big stake in Citi because it wasn’t ready to move quickly enough.

“An insider at Citigroup revealed that the US investment bank had first approached the China Development Bank (CDB) to see if it was interested in acquiring a stake in the bank. CDB had shown strong interests in doing so, the insider said, but told Citigroup that it would need three days to make a decision because it needed, as a state-owned bank, to get government approval. At that same time, Abu Dhabi was also offered the opportunity to invest and was able to move forward with the purchase right away. The insider added that it was for this reason that CIC didn’t hesitate when approached by Morgan Stanley about acquiring a stake, having learnt from CDB’s experience that it needed to act quickly.”

Wen Jiabao: How China Plans to Reinforce the Global Recovery

China CIC to Manage More of its Funds in House

Vietnam and China in an Era of Economic Uncertainty

China to Push Ahead With ‘Go Abroad’ Policy – Ministry