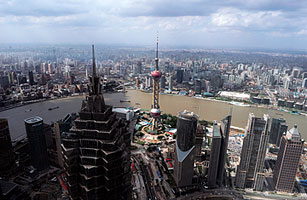 From the Time Magazine:

On a steamy saturday afternoon just outside Shanghai, Zhang Yi is in a blessedly cool General Motors showroom, kicking the tires of the company’s newer models. He’s not there to beat the heat. He drives a small Volkswagen now and wants to upgrade. A middle manager at a state-owned steel company, Zhang has no worries about his job or China’s economy. “Things are still pretty good,” he says. “I have no problem now affording one of these,” nodding toward the array of gleaming new Buicks nearby.
(Read “China’s Booming Car Market Shifts into Reverse.”)

There aren’t a lot of places in the world these days where consumers speak with that kind of confidence. With the U.S., Japan and all of Europe mired in the worst global recession in 30 years, China has shown a restorative strength that six months ago many doubted it had. A devastating slump in exports crippled growth late last year, but on the back of a $586 billion government stimulus program — about 13% of GDP, spread over two years — China has snapped back. The economy grew 7.9% in the second quarter and will now probably expand 8% or more this year. Evidence of increasing momentum appears almost every day. Factory production has begun to edge up, in part because Chinese consumers continue to spend money at a healthy pace. Auto sales, helped significantly by government subsidies for small-car purchases, hit an all-time record in April and will easily surpass those in the U.S. this year. Overall, retail sales in China this year are up 16%.

What to Expect at China’s Fifth Plenum

Why China is So Worried About Labor Unrest

Is China About to Become The World’s Largest Economy?

The End of ‘GDP Worship’ in China?