What to Expect at China’s Fifth Plenum 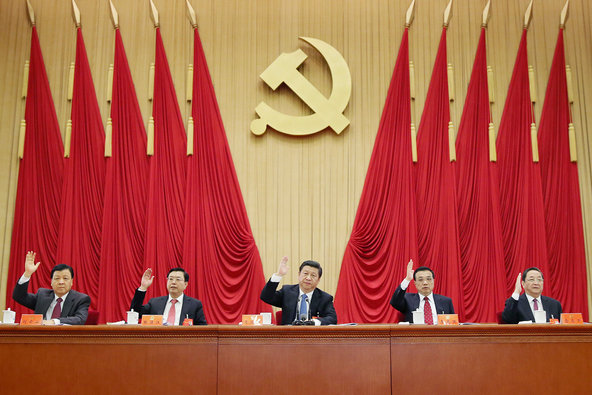 The 18th Communist Party Central Committee will hold its fifth plenary session in Beijing next week to review policy proposals for the Party’s next five-year plan of national development. High on the agenda is the discussion of China’s transition away from an economy dependent on exports and infrastructure spending to one powered by services and consumer spending. CNBC’s Ansuya Harjani lists five must-knows for the upcoming party plenum:

What’s at the top of the agenda?

Just that. The 13th FYP, a blueprint about 100 pages long that maps the government’s main economic and development initiatives for 2016-2020, will be front and center at the meeting.

The document will contain both qualitative goals, such as “building a moderately prosperous society by 2020” as well as quantitative targets on economic, social and environmental issues. The proposals will be discussed again at the December annual Central Economic Work Conference, with the final draft approved at the annual National People’s Congress meeting in March 2016. [Source]

The government’s new average annual economic growth target for the next five years is expected to be set at 6.5 percent. The Economist looks at the implications that the new GDP target will have on the economy:

For all that, the most-watched part of the new plan will still be its target for GDP. The current one aims for average annual growth of 7% from 2011 to 2015. In reality, it is likely to be about 7.8%. In the past, targets were often set well below the potential growth rate. That could change with the new plan. State media have suggested the new target will be 6.5%, beyond what many forecast for the coming years.

This could have big implications for economic policy. The farther growth slips below target, the more the government will be under pressure to stimulate the economy or, failing that, to doctor data. Given China’s already-heavy debt burden (see article) and analysts’ abiding cynicism about official statistics, neither outcome would be welcome. Some economists have called on China to abandon its growth target altogether, to give itself more breathing space. But Kuang Xianming of the China Institute for Reform and Development, a think-tank, says the GDP figure will remain in the plan, because it serves as a lodestar for all other economic policies. [Source]

In addition to social and economic policymaking, high-level personnel changes are also expected to take place at the Fifth Plenum as has been the case in years past, Michael Forsythe at Sinosphere reports:

Nothing has been announced, but Alice Miller, who studies China’s elite politics at Stanford University, points out that it is the plenums at the midpoint between the party congresses, which take place every five years, where almost all personnel changes happen. There are normally seven plenums between congresses, and almost all personnel changes in the years since Mao’s death in 1976 have occurred in the fourth and fifth plenums. This year’s meeting is the fifth plenum of the party’s 18th Central Committee.

[…] Mr. Ding said one possible change could be a new party chief for Shanghai. Han Zheng, a Politburo member and the city’s current party boss, may be replaced, Mr. Ding and other China watchers said. Another possibility is that Gen. Liu Yuan, the son of the former President Liu Shaoqi, may win an appointment to the Central Military Commission.

Mr. Ding is also looking for possible rule changes that would make it easier for older senior leaders to stay on past customary retirement ages. That could allow someone like Wang Qishan, 67, the party’s anticorruption enforcer, to stay on for another five-year term starting in 2017. [Source]