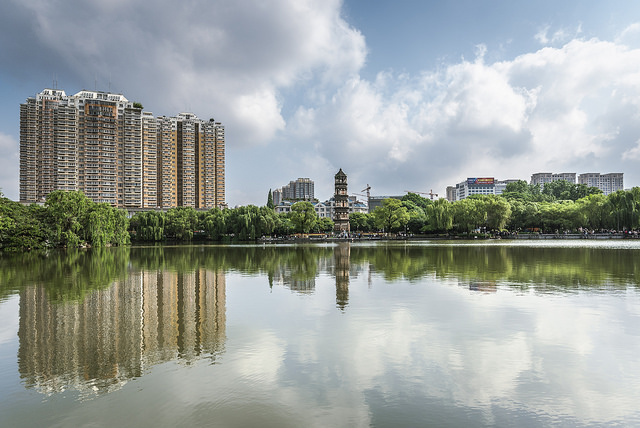 China will surpass middle income status (defined by the World Bank as having a per capita gross national income between $1,026 to $12,475) by 2024, according to an article in the People’s Daily by Zheng Bingwen, a researcher with the Chinese Academy Social Sciences. Zheng explains that the path to upper income is clear, provided three types of disaster are avoided:

After several decades of rapid development, we are fully confident in the future: as long as no disruptive political mistake, devastating economic blow, or tectonic shift in the system occurs, there should be no concern that China will transcend the “middle income trap” in six or seven years. At that moment, a century of struggle will achieve its goal, and a total moderately prosperous society will have been established. [Chinese]

Those stipulations sound to many netizens like an endorsement of the political status quo. As Weibo user @NLY_MR interpreted the People’s Daily article, “What this means is, ‘You fart people have to keep eating it. Whatever you do, don’t be reckless, or you won’t reach upper income!'” Others on Weibo complained that the poor still struggle, and that they themselves can’t afford major purchases, like housing.

At Voice of America, economist He Qinglian considers each of the “three can’t happens” (三个不出现) Zheng enumerates in his article. She construes the aversion to a “tectonic shift in the system” as continuity of power at the highest levels of the Chinese Communist Party. She also warns that one of the “three can’t happens” is impossible to control for:

The phrase “disruptive political mistake” comes from a speech by His Majesty from a few years ago. In October 2013, Xi Jinping went to APEC as president of China. When talking about Reform and Opening, he said, “China is a great nation. There can be absolutely no disruptive mistakes on issues of fundamental importance. If one does occur, there is no going back, no fixing it.”

As usual, Chinese and foreign media immediately set about deciphering his words. The general understanding, regardless of nationality or political affiliation, was that “issues of fundamental importance” referred to the imperative that China continue on the socialist path under the leadership of the Chinese Communist Party, and that “disruptive mistakes” meant abandoning this policy and moving towards democratization. This is the primary mission of “maintaining stability” in China. Any organization that impairs stability in China, any thought, speech, or act that could upset stability, no matter where it comes from, is a “disruptive” mistake.

When Zheng Bingwen says “no disruptive political mistake can occur,” he is reiterating Xi’s words from three years ago. As long as China does not move towards democratization—whether the third wave democracy of the color revolutions or something like the Arab Spring—if China rejects them all, then the rush towards a higher income society is basically guaranteed.

[…] Judging from the experience of half the globe—Europe, Asia, and South America—in the march from socialism to communism, the easiest part is setting goals, and the hardest part achieving prerequisites. Zheng Bingwen proposes the goal of China reaching upper income around 2024. But the key isn’t in setting the goal, it’s in how the prerequisites for reaching that goal are met. At this point, about half of the requirements for the “three can’t-happens” are in place: “political disruption” has been prevented, and “tectonic shift in the system” has been half-prevented, in that Xi Jinping’s power base is being cemented, and he has taken the initiative to fight for everlasting power. Preventing the second half from happening should be expected.

But warding off a “devastating economic blow” is too difficult. Market forces are pushed and pulled by uncountable “invisible hands,” and no one knows which will be the deciding factor. Take, for example, the grand One Belt One Road project. One of its core elements, an international high-speed rail, has started and failed over and over again. So the only hope to ensure the “three can’t happens” don’t happen, the CCP’s powerful hand must become the omnipotent palm of He Who Has Thus Come and work miracles in battle with the immaterial, ever-present “invisible hands” of the market. [Chinese]

Amid reports of a slowdown in China’s economic growth, authorities have called on  economists, business reporters, and analysts to adopt a more positive outlook. At The Conversation this January, Peter Robertson and Longfeng Ye wrote that “China’s income level is currently at a level where many countries seem to stagnate,” comparing it to Brazil and Turkey, which have both hovered between 10-30 percent of the United States’ per capita GDP since 1950 (the data ends at 2010). But there is not a clear pattern to the causes of the middle income trap, nor to the health of the economy within it.