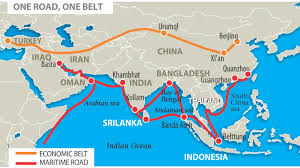 Three years ago, Xi Jinping began touting China’s plans for a “New Silk Road,” a revival of the ancient trade network that started in the capital of Chang’an (present day Xi’an) and played a major role in developing the civilizations of China, Persia, the Indian subcontinent, Arabia, and Europe. The proposed blueprint will connect more than 60 countries, lending the planned trade network potential to cover even more ground than the fabled Silk Road that inspired it—that is, if the plan isn’t eclipsed by its massive ambition.

Collectively known as the One Belt, One Road initiative (OBOR), it is comprised of two main routes, each with various tendrils of resource infrastructure, and several interconnecting corridors. The northern Silk Road Economic Belt will connect Beijing to Poland via Central Asia, the Middle East, and Russia. The southern Maritime Silk Road will begin in Fujian, trace the coasts of Southeast Asia, India, and the Horn of Africa, before winding into the Red and Mediterranean Seas to end in Italy; this route will also include a separate corridor heading southeast along Indonesia and to Australia, following a recent deal with Sydney. China has already announced $1 trillion worth of future investments, and the State Council estimated the entire project’s price-tag to be $8 trillion if implemented perfectly to Xi’s vision. Last year alone, Chinese firms signed almost 4,000 contracts, valuing $92.6 billion, with global partners from more than 60 nations. The OBOR has been called “[possibly] the most significant economic initiative in the world today.”

Last December, the Mercator Institute for China Studies published a detailed infographic map of the OBOR, and Rudolf Moritz outlined the strategic economic, political, and global power goals inherent in the plan:

From an economic perspective, China strives that the development of new trade routes, markets and energy sources will result in growth impulses and at the same time reduce dependencies. Projects linked to the OBOR are to once again fill the order books of Chinese SOEs which are presently suffering from overcapacities. Furthermore, with the expansion of the Eurasian transport infrastructure Beijing aims to lay the foundations for China-centred production networks, for instance with Chinese companies relocating production to South-East Asia.

Politically speaking, the Chinese leadership hopes that the OBOR initiative stabilises Beijing’s western Provinces [see prior CDT coverage of instability in Xinjiang and Tibet], as well as the neighbouring trouble spots, like Pakistan or Afghanistan. As China finances most infrastructure projects Beijing is also able to increase its political influence [see also CDT coverage of Beijing’s increasing involvement in the Middle East]. Many countries along the Silk Roads depend on Chinese infrastructure investments.

The overarching goal is to be an active part in the establishment of a multipolar world-order. China seeks to play a constructive role in the reform the international system. The OBOR-Initiative is intended to be the foundation of a new type of international relations. The Chinese leadership speaks of the establishment of a “community of common destiny”. Core elements are more connectivity in Eurasia, “win-win-cooperation”, “mutual progress and prosperity” as well as upholding the UN principle of non-interference in the internal affairs of other states. [Source]

The ambitious project has already run into some problems on all three fronts. On the economic: a financial assessment from The Economist Intelligence Unit (last updated in 2015) suggests significant risk for many countries likely to be included—and expected to invest—in the plan. On the political: in Pakistan, where a $46 billion link is under construction, security concerns abound, and some are skeptical the project will ever be finished. As for the overarching challenge to the global order: Washington last year took measures to dissuade allies from signing on to the China-proposed Asian Infrastructure Investment Bank (AIIB)—the main finance source for the OBOR, and another of China’s challenges to the global status quo. (At China-US Focus, Charhar Institute research fellow Zhao Minghao outlines American anxiety about Beijing’s ambitions, and argues that Washington shouldn’t panic regarding OBOR plans and other Chinese international development efforts.)

At the South China Morning Post early this month, political scientist Robert Bianchi wrote on the many roadblocks facing the successful implementation of the OBOR, a plan that is “starting to look more like a gamble than a strategy”:

The timing of China’s great leap outward could hardly be worse, given the turmoil currently sweeping Eurasia, the Middle East and most of the Islamic world. China and other great powers are pursuing new markets and allies at each other’s expense. This competition is encouraging resource wars and proxy wars that weaken all participants and unleash a chain-reaction of revolutionary movements fuelled by ethnic and religious hatreds.

[…] China will have great difficulty convincing other countries that it can become a world-class mediator as long as it rejects mediation of its own international disputes. By pressing untenable territorial demands in the South China Sea, Beijing is not only alienating key neighbours controlling the straits of Malacca and Makassar, but it is also stoking an arms race across the Pacific and Indian oceans – jeopardising already vulnerable maritime routes it cannot defend.

China’s protracted feud with Turkey over the fate of Uygur refugees from Xinjiang (新疆) has proved equally self-defeating. Trying to prevent Turkey from resettling Chinese Muslims [see prior CDT coverage of the would-be Uyghur refugees, and subsequent protests of Xinjiang policy in Turkey] has played into the hands of terrorists looking for new recruits in Syria. Just when it seemed that Chinese diplomats had managed to persuade Pakistan to expel Uygur fighters along its frontier with Afghanistan, Beijing’s quarrels with Ankara began feeding terrorist routes that circle back to China’s own troubled borders.

Inside China, opinions about the New Silk Road are increasingly coloured by economic slowdown and political repression. When the government first announced the projects in 2013, they were greeted with a mixture of indifference and bemusement. Now, the commentary has become more openly critical. A growing stream of writers – including important military, party and scholarly figures – are questioning the wisdom of the policies. […] [Source]

The SCMP early this year reported on concerns from the U.N. Office on Drugs and Crime that OBOR deals could be exploited by criminals due to inadequate cross-border safeguards. On the heel of SCMP reports highlighting concerns, China strategist Andrew Leung last week argued that OBOR partner countries’ potential gains are well worth the risks. Also from the SCMP:

[…] The rationale is global connectivity, which defines the 21st century. It is part and parcel of what the World Economic Forum calls the Fourth Industrial Revolution. China is a central hub for the world’s production, supply, logistics and value chain. “One Belt, One Road” will deepen China’s infrastructural, economic, institutional and cultural connectivity with key parts of the globe. Not only will this enhance China’s global rapport and influence, it will also help counter exposure to geopolitical risks inherent in America’s “Asia rebalancing”, and China’s own energy security challenge and other imponderables in the South China Sea.

One Belt, One Road” doesn’t translate into offloading surplus capacity in commodities such as steel and coal; it involves exporting excess capital to invest in productive infrastructure across the globe.

Projected investments are estimated to benefit 4.4 billion people in 65 countries. The total size, according to some estimates, could be more than 12 times America’s Marshall Plan to aid post-second-world-war Western Europe, in comparable money-of-the-day terms.

[…] All these opportunities come at a time of rapid internationalisation of the renminbi, including currency swaps, trade-financing deals and offshore bond issuance. The currency has been included in the IMF’s basket of reserve currencies. Many banks and financial institutions across the globe are salivating for a greater slice of the action. [Source]

Despite the impressive investment figures, there are concerns both within and outside the Chinese government that the initiative may have been “too hasty, too broad, too ambitious and without sufficient preparations for unexpected contingencies,” said Christopher Johnson, a senior researcher with the Centre for Strategic and International Studies in Washington, in a research report.

[…] Almost every province and some cities in China have set up funds or unveiled projects to dovetail with “One Belt, One Road”, but there was no agency like Japan’s Ministry of Economy, Trade and Industry to coordinate overseas investment, an economist at a think tank in Jakarta said.

“The ministries do not share information. Each goes its own way. Without proper communication with local people, it is easy to fuel fears of neocolonialism and speculation about China’s real intentions,” the economist said. [Source]

The Economic Times reports further on concerns related to economic slowdown, and notes suspicion from regional strongholds about how China’s plans may affect their interests:

China is pushing its initiatives in Kazakhstan and other central Asian countries that have traditionally been strongholds of Russia.

Speculation is also rife that Russia is getting worried over China’s increasing presence there as Astana, Kazakhstani capital, wants to use Beijing’s economic strengths to cut its dependence on Moscow, the report said.

Meanwhile, in Southeast Asia, Beijing is challenging the presence of Japan, which has enjoyed strong economic dominance in the region for over three decades. [Source]

As analysts and media commentators warn of the uphill battle facing the planned trade route revival, English-language state media has been championing the plan. Beijing has also made the cultural legacy of the ancient Silk Road a primary part of its promotion strategy. At The Hindu, Atul Aneja writes about the “soft power infrastructure” of the New Silk Road, reporting on the upcoming First Silk Road Expo which will be held in the ancient Silk Road city of Dunhuang:

In September, thousands will descend in Dunhuang for the first Silk Road International Cultural Expo, whose mascot would be the [ancient Silk Road Buddhist site] Mogao grottoes. Organisers say that 72 countries have been invited to participate in the mega-event, which draws inspiration from China’s traditional engagement with a diverse set of people and cultures along the Silk Road.

The hosting of the event is not accidental. On the contrary, many see it as a strategic exercise of soft-power, to help blunt accusations that Beijing is pursuing self-centered regional dominance, in tune with its economic rise.

[…] The message of inclusivity, anchored in a harmonious tradition, as a norm of international conduct, resonates strongly among officials of the Gansu province, of which, Dunhuang is a part. “The Silk Road has a shared legacy, for not only did it involve China, but many other countries including India, Russia, and Italy,” says E. Jun, the director of the Gansu Provincial Museum in Lanzhou, the capital of Gansu.

The exhibits at the museum also include replicas of grottoes from Tianti Shan and Maiji Shan, powerfully echoing the intensity of India’s Buddhist-connect with China along a broad geographical band-width.

The scale of the cultural infrastructure being established in Dunhuang is stunning. […] [Source]

New Delhi has expressed reservations with the OBOR initiative. For more on Indian unease, see a March article from Scroll. For more on hang-ups towards the realization of Xi’s massive plan, see “Xi’s Silk Road Dream for China Hits a Speed-Bump in Thailand” from Bloomberg.