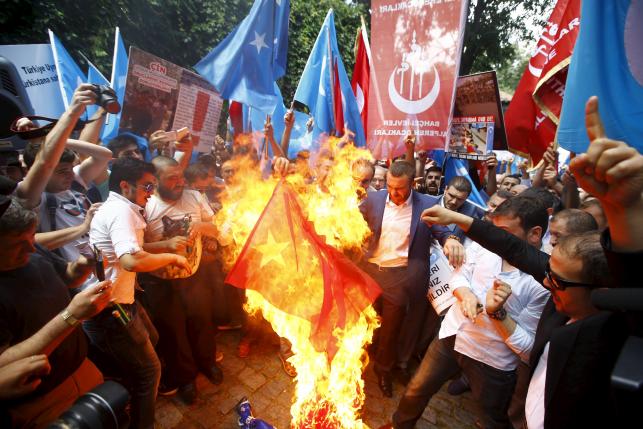 The notice, posted on the Ministry of Foreign Affairs website on Sunday, said there had been “multiple” demonstrations in Turkey targeting the Chinese government.

Relations between Turkey and China have been strained recently over the treatment of Muslim Uighur people in China’s far western region of Xinjiang, who have reportedly had been banned from worship and fasting during the holy month of Ramadan.

China’s treatment of the Uighurs is an important issue for many Turks, who see themselves as sharing a common cultural and religious background. Turkey vowed on Friday to keep its doors open to ethnic Uighurs fleeing persecution.

“Absolutely do not get close to or film the protests, and minimize to the greatest extent outside activities on one’s own,” the Chinese notice said. [Source]

Some of the demonstrations targeted business or individuals who appeared to be Chinese but in fact are not. A Chinese restaurant owner in Istanbul had to close his business after being threatened, Al Arabiya reports:

The owner of the restaurant, Cihan Yavuz – who is Turkish and investing his life savings in the restaurant, and even employs an Uighur cook – said the attack was baseless.

Yavuz told the local Hurriyet daily that “only a tiny portion of our customers are made up of Chinese customers. We do not serve alcoholic drinks. Although we work with Muslims, an attack like this has occurred.”

Recalling the attack, Yavuz said that six attackers had told them to leave the neighborhood, shouting “We do not want a Chinese restaurant here.”

The eatery, called “Happy China,” will be closing down. [Source]

A group of Korean tourists in Istanbul were attacked by participants in a march organized by a far-right nationalist group who mistakenly thought they were Chinese, according to Turkish newspaper Hurriyet.

A group of 173 refugees from Xinjiang—mostly women and children—who had ended up in Thailand after leaving China were resettled in Turkey on June 30.

Read more about reported restrictions in China during the Ramadan period this year and in years past, via CDT.