Xinjiang Party Chief Calls for the ‘Sinicization’ of Religion 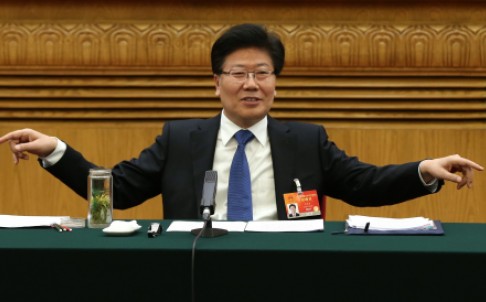 While addressing a meeting of religious representatives in Urumqi on Sunday, Zhang Chunxian, the CCP’s top official in Xinjiang, said that religion must be “sinicized” in order to combat hostile forces both inside and outside of China. The South China Morning Post reports:

Xinjiang’s top Communist Party official Zhang Chunxian told religious leaders that “hostile forces” were stepping up their infiltration in the restive region and that their teaching must be “sinicised” to ensure social stability, state media reported yesterday.

“Immerse religions in the Chinese culture… in order that religions can develop in a normal and healthy way,” he said.

He also said religious leaders should work hard at rooting out the harmful influence of religious extremism and must voice their strong condemnation of “acts of violence in the name of Islam” and expose the work of violent terrorists and extremists.

The Global Times reports further on Zhang Chunxian’s statements at last weekend’s gathering in Urumqi, which included an emphasis on strengthening patriotism among religious leaders:

Xinjiang Party chief Zhang Chunxian has recently warned of an escalation of “infiltration and sabotage activities in the name of religion” and called the battle with extremism a “serious political struggle.”He also laid out a new set of standards regarding what virtues the government is looking for in religious leaders, placing patriotism above all other requirements.

Zhang’s comments highlight the Chinese authorities’ determination to combat extremism as they see this problem not only as a security threat but also as a political danger as extremists seek to topple the government, analysts said.

[…] “There have been escalated infiltration and sabotage activities from foreign hostile forces that are disguised as religion,” Zhang said, adding that the battle against religious extremism is a serious political struggle and there is no room for conciliation.

“Religious extremism is not about religion. It’s a political force with an agenda that goes completely against this government. Especially in Xinjiang, it’s a life-and-death fight,” Turgunjan Tursun, a research fellow at the Xinjiang Academy of Social Sciences, told the Global Times. [Source]

An upswing in violent incidents in Xinjiang and elsewhere in China has been blamed by authorities on separatists and religious extremists from Xinjiang, who officials say are being encouraged by foreigners involved in the global jihad movement. The central government responded last May by launching an ongoing “war against terror,” which has included increased regulations on religion in parts of Xinjiang. Reuters reports that several local governments in Xinjiang are again this year taking measures to discourage the observance of Ramadan as the holy month approaches:

In recent days, state media and government websites in Xinjiang have published stories and official notices demanding that party members, civil servants, students and teachers in particular do not to observe Ramadan, something that happened last year too.

[…] In Jinghe county near the Kazakh border, food safety officials decided last week that they would “guide and encourage” halal restaurants to stay open as normal during Ramadan, the government said on its website.

Those that do stay open would get fewer visits from food safety inspectors, it added.

[…] In Maralbexi county, where 21 died in violent unrest in 2013, party officials had to give verbal as well as written assurances “guaranteeing they have no faith, will not attend religious activities and will lead the way in not fasting over Ramadan”, state media said. [Source]

In the neighboring Tibet Autonomous Region—a region with similar cultural and religious diversity, and where the maintenance of social stability is likewise a key policy goal after years of unrest— foreign influence is also blamed for the incitement of separatism and social unrest. The Dalai Lama, who Beijing continues to view as a separatist, was recently criticized by Chinese authorities after suggesting that he could be the last incarnation of the spiritually—and formerly politically—empowered institution. Authorities in Tibetan regions have also been encouraging patriotism in the religious community, and making religious institutions a key venue for the dissemination of Party propaganda.

Zhang’s call for religious leaders to “steer religions forward with Chinese socialism,” hints at a central policy giving the Party direct authority over religious observance. Last year, after church demolitions and cross removals in historically Christian regions of Zhejiang met with public protest, the State Administration for Religious Affairs announced that it will “continue to promote the development of Christianity […] in a way compatible with the country’s path of socialism.”

Foreign hostility has also been labeled a threat in realms of society other than religion. Ideological campaigns against the influence of Western values have recently been launched in the Party, the academy, and the legal system. Commentators have noted that “ideological security” is a major focus of controversial draft laws on national security, terrorism, and the management of foreign NGOs. As the government rallies against the influence of foreign ideas on social and political stability, intrinsically Chinese models of political ideology are being promoted. The South China Morning Post’s Cary Huang reports on an imminent patriotic education campaign for officials:

Millions of government officials and civil servants on the mainland will be asked to learn ancient Chinese classics – or “guoxue” – as part of a patriotic indoctrination course aimed at boosting their talents and morals.

To prepare for the nationwide education campaign, the Chinese Academy of Governance has published its first series of textbooks on ancient Chinese classics aimed at officials, the Legal Daily reported yesterday.

“All the current government cadres at various levels will be asked to undergo the training course on traditional Chinese culture, provided by the Chinese Academy of Governance and its affiliates at provincial level governments,” it said […] [Source]