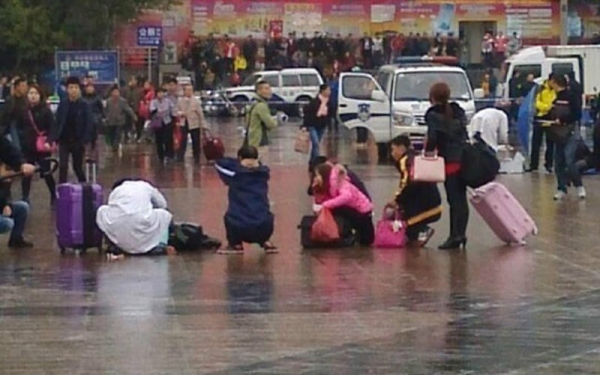 No website may repost images related to the knifing incident at a railway station in Guangzhou today, no exceptions. This type of negative news must absolutely not be promoted during the Two Sessions. (March 6, 2015) At least two attackers wielding knives reportedly attacked commuters at a railway station in the southern city of Guangzhou during the morning rush hour on Friday. At least nine people were injured. The police shot dead one suspect and arrested another.

A knife attack at a rail station in Kunming last March left 31 dead and 100 more injured. Three men were sentenced to death and one woman to life in prison for their involvement in the attack. All of the convicted appear to be Uyghur, based on their names. Another knife attack at a Guangzhou rail station last May left six injured.

The Chinese government launched a yearlong “war on terror” last May in the wake of these and other violent incidents, including a 2013 Jeep crash in Tiananmen Square. Authorities allege that many recent incidents of violence across China were carried out by ethnic Uyghurs. The campaign, extended to the end of 2015, focuses on security in Xinjiang, where most Uyghurs live. The “war on terror” has so far included increased restrictions on religious garb and worship in Xinjiang, which critics argue only feeds the impetus for violence.

Amid the crackdown, authorities have been strictly regulating the media narrative on violence.

The names and ethnicity of today’s assailants have not yet been released, but witnesses told the South China Morning Post that they appeared to be Uyghurs.