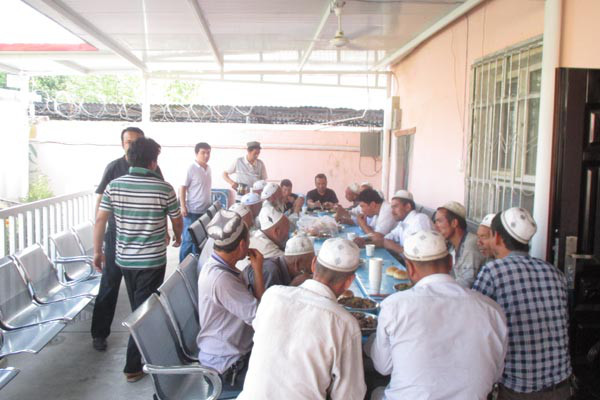 With Saturday’s fifth anniversary of deadly riots in Urumqi approaching, and amid a steady stream of arrests, trials and sentencings that has been described as a “race” between local authorities, Xinjiang’s Party chief Zhang Chunxian reiterated promises of a firm response to recent violence this week. From Angela Meng and AFP at South China Morning Post:

Xinjiang party chief Zhang Chunxian has vowed to use an iron fist to stop terrorists, while also pledging to use an education campaign to engage ethnic Uygurs more effectively.

Zhang vowed to respond to violence “firmly’ and “precisely” during a visit to a military outpost in Urumqi with armed forces commander Wang Jianping yesterday, according to local news portal Tianshan.net.

[…] Xinjiang has become the front line in Beijing’s national anti-terrorism crackdown, with the central government blaming the recent spate of violence around the country, including bombings and knife attacks, on separatists seeking to establish an independent Islamic state.

However, human rights groups and the mainly Muslim Uygurs say Beijing’s hardline stance against religious practices and human rights violations in Xinjiang are only driving more people to extremism. [Source]

As in previous years, authorities in Xinjiang have ordered civil servants, students and teachers not to fast during Ramadan, and discouraged others. From Heather Timmons at Quartz:

Students, teachers, civil servants and and Communist Party cadre members—a far-flung group that includes everyone from nurses to engineers to scholars—are forbidden from fasting and other activities. Government-run websites are running prominent messages explaining the ban on fasting, and lauding Muslims who do not fast.

[…] “Although it was Ramadan, the party members and the officials in this area showed their attitudes and expressed their opinions by not fasting, which shows the advance of the Communist Party,” and shows they are people who admire science and want to improve society, the [Tarim River Basin Management Bureau]’s website said. [Source]

At The Economist’s Analects’s blog, Nicola Davison posted an overview of recent developments and competing explanations for the violence: foreign instigation on one hand, and domestic grievances on the other. While claims of the former have long been disputed, there have been growing signs that it is emerging as a factor alongside religious restrictions, heavy-handed security, and economic disparities.

Foreign analysts have long been sceptical about the links between Uighur separatists and the global jihadist independence movement. The unrest they say instead stems from resentment at Communist Party rule. There are around ten million ethnic Uighurs in China. Their language is Turkic and they practice Sufi Islam. Since the party wrested control of Xinjiang in 1949 there have been violent clashes. Some Uighurs protest what they say is cultural assimilation. In 1949, 76% of Xinjiang’s population was Uighur and 7% ethnic-Han. In 2012 Uighurs made up 46% while the number of people of Han ethnicity amounted to 39%. Grand infrastructure schemes and booming trade is transforming the region. But many Uighurs—especially those who do not speak Mandarin or who lack skills—feel they miss out on benefits that instead flow to Han migrants.

[…] The recent spate of terror attacks suggests that the government’s Xinjiang strategy is going badly awry. On May 22nd attackers drove two cars into a market in Urumqi, throwing explosives and killing 31 people. In April in a knife and bomb attack in the same city three people died. In March a group of Uighurs stabbed 29 people to death in Kunming, a city in the south-west. A recent review of China’s security environment by Chinese academics said terrorism in the country has entered an “active period”.

Meanwhile analysts who watch online jihadist content in other languages report references to Turkestan from non-Uighur militants are becoming more frequent. This suggests that Xinjiang may indeed be increasingly on the radar of a broader global jihad. If the videos are any indication Mr Xi will have to cast his net wide. [Source]