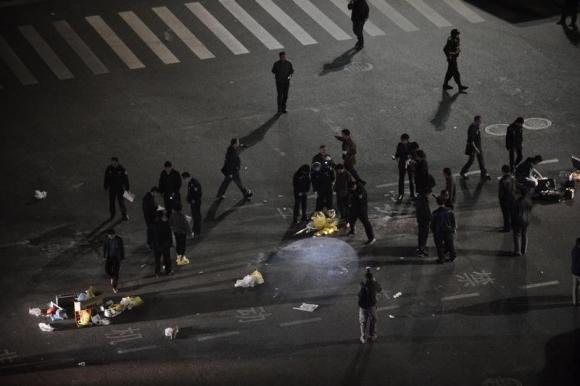 Four people accused of being the surviving perpetrators of the March 1st Kunming knife attack have been formally charged, Reuters’ Sui-Lee Wee and Michael Martina report, two weeks after three others were sentenced to death over another attack in Beijing last October. 113 people with Uyghur names were sentenced on terror-related and other charges in Kashgar last week, they add.

“The Kunming Municipal People’s Procuratorate found that the suspects were involved in organising, leading or taking part in the terrorist attack as well as intentional homicide,” the official Xinhua news agency said, citing the prosecutor.

[…] Courts in Xinjiang had sentenced 113 people to jail terms ranging from 10 years to life for terrorist activities and other crimes, the Xinjiang government said.

[…] Those sentenced were accused of crimes such as “being involved in organising, leading and participating in a terrorist organisation, inciting ethnic hatred and ethnic discrimination”, bigamy, drug trafficking, robbery among other crimes, the Tianshan news report said.

There is now a “competitive race” among various areas to arrest and sentence Uighurs, Dilxat Raxit, spokesman for the World Uyghur Congress, the largest group of exiled Uighurs, said in an email. [Source]

These are the latest in a series of mass sentencings during China’s ongoing anti-terrorism campaign, which have fueled fears that the proceedings “might be about [putting on] a show and warning people rather than delivering justice.” Another element of the campaign has been the rearming of many Chinese police, prompting concerns about safety, training, and officers’ judgment.