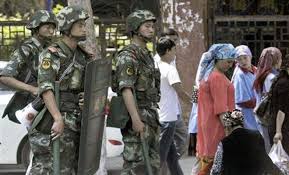 Following a series of deadly attacks attributed to Uyghur extremists, 81 people in China have been sentenced on terror-related charges, nine of them to death, while 29 new suspects have been arrested. From Christopher Bodeen at The Associated Press:

Four high-profile attacks on civilians since late October have handed a major security challenge to President Xi Jinping during his first 15 months in office. The attacks have been blamed on extremists from the Xinjiang region’s native Turkic-speaking Uighurs seeking to overthrow Chinese rule and inspired by global jihadi ideology.

Since a vegetable market bombing that killed 43 people on May 22, officials have issued a flurry of announcements citing more than 300 arrests and scores of rapid prosecutions resulting in stiff sentences including the death penalty — raising concerns among some human rights advocates that the prosecutions may be trampling legal rights.

David Zweig, a political scientist at the Hong Kong University of Science and Technology, said the Chinese government feels threatened by the attacks and wants to show the public it has the means to stop them.

“They would be quite concerned that the general population is afraid that they can’t manage the situation,” Zweig said. “They probably feel that if they go and arrest a lot of people very quickly and lock them up, that they might have a chance of breaking the cycle.” [Source]

Thursday’s was the latest in a series of mass sentencings which Human Rights Watch’s Maya Wang commented last month “gives an uncomfortable sense that it might be about [putting on] a show and warning people rather than delivering justice, and makes people question to what extent due process is being upheld.” The proceedings seem intended to deter extremists while reassuring the people; public tension was illustrated on Thursday when a minor incident on the Beijing subway spawned rumors of a new attack. From James T. Areddy, Te-Ping Chen and Liyan Qi at China Real Time:

Early Thursday evening, Internet users circulated photos that appeared to suggest chaotic moments in a subway exit tunnel: almost a dozen shoes, a black shirt and a hairband. Close-ups appeared to show smears of red on the tiling. The origin of the photos wasn’t clear, however, and it wasn’t certain whether they came from Guomao on Thursday.

On Weibo Corp’s miniblog service, one person wrote of a “stampede” of people rushing for the exits but didn’t offer an explanation for what might have sparked a panic. Others repeated rumors of a knifing or some other incident.

The police presence at the station appeared heavier than normal. Officers said an investigation was underway. A police officer surnamed Xu said a dispute had occurred when one person had stepped on someone else’s foot and an altercation — and a panic — ensued. “People get into disputes, they step on each other’s feet. This is normal,” he said. [Source]