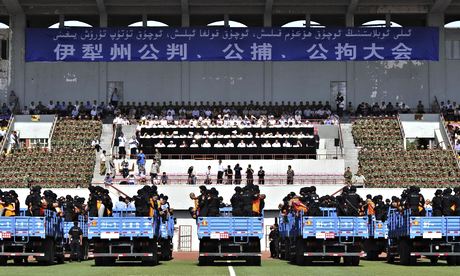 After the government announced that Xinjiang would be the “main battlefield” in a year-long “ultra-tough, unconventional” crackdown on terrorism, Reuters reports that officials in northern Xinjiang held a rally at which 55 people were publicly sentenced for various crimes:

Local officials in China’s western Xinjiang region held a public rally for the mass sentencing of criminals on Tuesday, handing out judgements for 55 people and at least three death sentences for crimes such as “violent terrorism”, state media said.

The public sentencing, reminiscent of China’s revolutionary era rallies, attracted a crowd of 7,000 at a sports stadium in Yining city in the northern prefecture of Yili.

Photos showed packed stadium bleachers and trucks parked on the sports field loaded with prisoners in orange vests being guarded by armed police.

[…] The public sentencing made clear the determination of the ruling Communist Party to strike hard at “violent terrorism, separatism and religious extremism”, the prefecture’s deputy Party secretary Li Minghui said at the rally.

“[We] must resolutely strike criminals … and boost the confidence and will to fight for all ethnicities among the masses,” Li said.

[…] Individuals named in the report on the latest sentencing rally all appeared to have Uighur names. [Source]

After the most recent in a string of violent “terrorist” attacks killed dozens at an Urumqi market last Thursday, Xinjiang party secretary Zhang Chunxian declared a “people’s war” against terrorism. Over 200 suspected militants have reportedly been detained in China over the past month, and state media has claimed a “major victory” for anti-terror operations in Xinjiang. The mass sentencing in Yining becomes the third public sentencing in Xinjiang in as many weeks, one of which reportedly occurred to the cheers of 300 cadres and students in Kashgar. The Guardian relays expert opinions on public sentencing in Xinjiang, its legality, and the possible outcomes of such “unconventional” means of combatting terrorism:

Mo Shaoping, a well-known lawyer in Beijing, said he believed such rallies were illegal. “I personally think the mass public sentencing session does not respect human rights. Before the legal trial, any suspect should be considered as innocent, so it breaks the spirit of the law,” he said.

Nick Holdstock, whose book The Tree That Bleeds details the year he spent living in Yining, pointed out that the city’s stadium saw a similar mass rally in 1997 after riots in the city. Three people were reportedly shot dead by police when a crowd gathered around the trucks carrying the prisoners to jail afterwards. Official reports blamed “rioters” who had ignored warning shots.

“One aspect is that the rally is intended as a deterrent, but I think it is also to reassure the public, who undoubtedly have concerns [about recent attacks],” Holdstock said. But he added that while the rally might make some people feel more secure, the unusual display could also be used to stoke resentment among others.

Maya Wang, of Human Rights Watch, said the event, taken alongside statements warning of unconventional measures in the anti-terror crackdown and calls for courts to “cooperate” in dealing with suspects, “gives an uncomfortable sense that it might be about [putting on] a show and warning people rather than delivering justice, and makes people question to what extent due process is being upheld.” […] [Source]

The Global Times notes that officials who aren’t staunchly behind Beijing’s hardline approach to anti-terror in Xinjiang are themselves becoming targets:

A local official in Ili prefecture, Northwest China’s Xinjiang Uyghur Autonomous Region, has been placed under investigation for harboring an “ambiguous” attitude toward terrorist attacks, revealed an official from the region’s disciplinary inspection department.

Batur Duwamet, the official under investigation, was a deputy director of the general office of Ili government.

During an online interview with news portal ts.cn Tuesday, Ma Guowei, a deputy head of the regional commission for discipline inspection of the Communist Party of China, said the probe into Duwamet was a result of a tip-off by local people.

Ma said Duwamet made public remarks that are inconsistent with the regional government’s ethnic policies and held an ambiguous stance over terrorist attacks, but didn’t give specific details. [Source]

While China has blamed religious extremism and external separatist organizations for fomenting unrest in Xinjiang, many point out that Beijing’s policies in the region (which have been noted to economically disadvantage Uyghurs and regulate cultural and religious practices, not to mention the frequent crackdowns) also play a role. After providing a list of “recent policies that seem to comprise an assault on Uyghur culture,” longtime Xinjiang researcher James Millward examines the complex relationship between civil rights, terrorism, and ethnic autonomy (or lack thereof) in Xinjiang. From the LA Review of Books:

What is the relationship between the civil rights problem and the terrorism problem? Are they linked? Some say so. Uyghur rights groups, while deploring the attacks, say that Chinese oppressive policies have led to the outbreak of Uyghur violence.

The Chinese government opposes this view, arguing that the sources of religious extremism and terrorism are external and unrelated to its own policies. It blamed the recent Urumqi train station attack on the East Turkestan Islamic Movement (ETIM), a group that the United States once listed as an international terrorist organization. (The United States has since delisted ETIM, which has seemingly dissolved and may have been replaced by the equally murky Turkestan Islamic Party.) State media so far say that the five perpetrators of the North Park Street attack organized the attack themselves, under the influence of foreign-inspired religious extremism and violent video and audio recordings.

It’s likely that the truth lies in between: Chinese policies and never-ending crackdowns, especially since the 2009 riots, have created a climate in which some Uyghurs are more likely to heed twisted, pseudo-religious ideologies that advocate killing innocents to send a political message. […] [Source]

With Beijing pursuing an “ultra-tough” crackdown on terrorism in Xinjiang, the government has also acknowledged that economic inequality contributes to unrest, and has pledged a “soft touch” to anti-terror. From Xinhua:

As well as tough counter-terrorism moves, measures to improve quality of life by securing jobs and education should also be adopted as a soft but fundamental touch to address the threat.

[…] Creating jobs is top of the agenda while balancing the geographical spread of education is labelled a “priority.”

[…] Terrorist attacks in Xinjiang in recent years were initiated by an extreme minority who have their own unique features. However, the perpetrators also share similarities — for example, youth, poverty, unemployment or little educational background. […] [Source]

As unrest has been rising in far western China in recent years, so has tourism, facilitated in part by new rail lines and the growing number of eastern city-dwellers with expendable incomes. In effort to encourage the continued economic benefits of tourism to a region as scenic as it is restive, authorities are considering a cash incentive plan. The New York Times reports:

The authorities in the far western region of Xinjiang, which has been hit by a series of terrorist attacks targeting civilians, are considering offering cash bonuses to tourists from other parts of China this summer, the state news media reported.

The tourists would receive 500 renminbi, about $80, toward their trip, China Radio International reported on its website, citing Inam Nesirdin, the head of the Xinjiang tourism bureau.

Xinjiang is China’s largest region, with large deserts, high mountains and many archaeological remains of important towns on Silk Road trade routes between China and Central Asia. It is a major destination for both foreign tourists and Chinese who want to travel to a place vastly different from China’s interior. […] [Source]