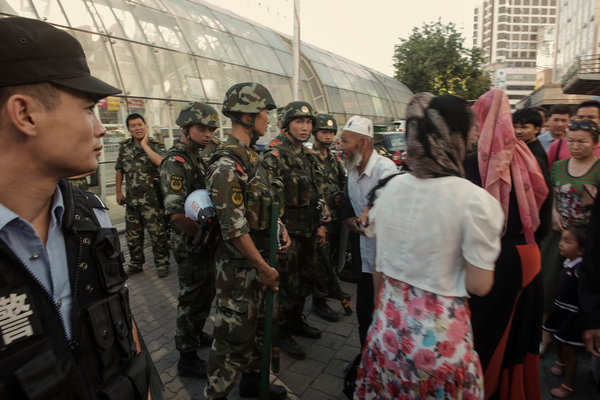 At the New York Times, Michael Forsythe reports on several recent deadly attacks in Xinjiang that remain uncovered by Chinese media, but were previously reported by Radio Free Asia:

The reports of bloodshed are nonstop. On Feb. 13, a man grabbed a police officer and then set off explosives strapped to his body, killing as many as eight people. Three days later, a father and son were shot and killed in another clash with the police. The following day, four police officers were stabbed to death, nine suspects in the attack were shot dead, and four bystanders were killed.

[…T]hese events, all reported by Radio Free Asia, took place in China, and the country’s news outlets, controlled by the ruling Communist Party, have yet to acknowledge they even took place.

[…] Radio Free Asia, a United States government-financed news organization that operates a Uighur-language service, confirmed the reports, which often appear on Chinese social media platforms, by calling local officials, residents and hospitals. The New York Times was able to independently corroborate some of the details in the Radio Free Asia reports.

[…] Shohret Hoshur, a reporter for the last eight years at Radio Free Asia’s Uighur service in Washington who interviewed local officials to confirm the three incidents, estimates that only about 5 percent of the clashes are ever reported in the state media, including the Xinhua news agency and Tianshan Net, a news portal of the Xinjiang government.

What does get reported, he said in a telephone interview, are usually events that are too big to contain that occur in densely populated urban areas or outside Xinjiang. […] [Source]

Click through for the Times’ details (via RFA) on these recent attacks. Xinjiang-based family members of RFA’s Shohret Hoshur have reportedly faced intimidation by state actors in effort to suppress his reporting from Washington.

Amid a recently extended crackdown on terrorism, China has repeatedly alleged a connection between violence in Xinjiang and jihadi movements abroad. Regardless of the validity of such claims, a report from Adam Minter outlines how decades of ethnic policies that are becoming increasingly repressive of Muslim Uyghurs under the current crackdown may be contributing to a rise in conservative Islam and increased violence in Xinjiang:

In 1949, 82 percent of the people living in Xinjiang were Uighurs. In the decades since, a government-sponsored influx of Han Chinese has changed the province’s ethnic makeup. By 2010, Xinjiang’s 10 million Uighurs accounted for just 46.3 percent of the population, according to that year’s census.

Uighurs claim that the government favors Han when handing out licenses to start businesses or use the region’s natural resource such as coal, oil and gas, and iron ore. Uighur resentments have turned violent. During the 1990s, and again in the late 2000s, ethnic riots and protests were frequent. Street violence in July 2009 was the deadliest in China since the Cultural Revolution, resulting in the deaths of more than 180 people, mostly Han.

[…] The crackdown is happening in parallel with the rise of conservative Islam, according to several reports. It may also be contributing to it. Only a decade ago, the veil was rare in Xinjiang; these days, it’s become a popular symbol of religious devotion and political disobedience. […] [Source]

Minter’s article cites a claim that 300 Uyghurs had joined the Islamic State in Iraq and Syria put forth by Chinese state media last December. While his and other foreign media reports have cited this number, independent commentators point out that the claim has yet to be verified:

Your regular reminder that there is *zero* confirmation that 300 Uyghurs have joined ISIS http://t.co/7KxeDRpC0w

Also see a post from Stockholm International Peace Research Institute noting China’s escalating energy and security interests in Iraq and Syria, and asking if this increased engagement in the volatile region could prove a challenge to Beijing’s long-held norm of non-interference. China has also been increasing engagement with Afghanistan for security and economic reasons, and seems ambitious to take on a peacekeeping role between the Afghan government and the Taliban.