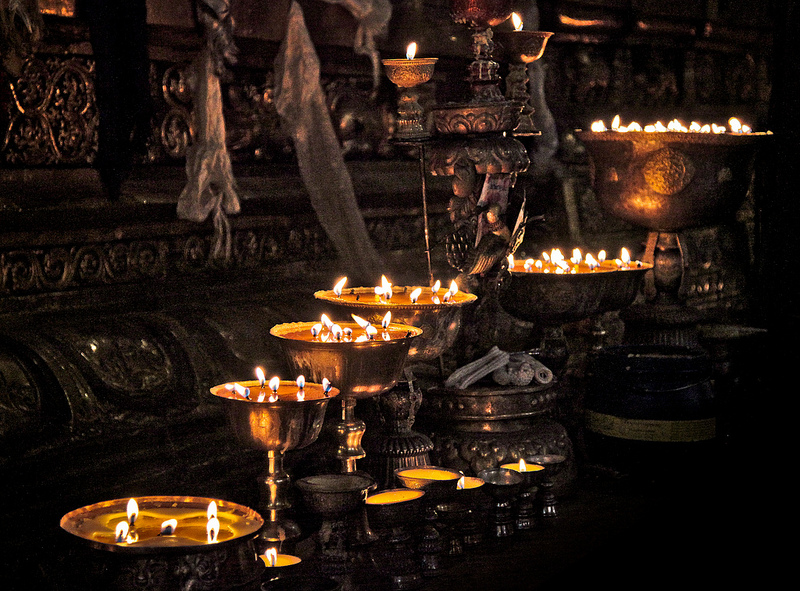 In the most recent issue of Party political theory journal Qiushi, Party Secretary of the Tibet Autonomous Region Chen Chuanguo wrote an essay calling for monasteries and temples in the region to aid in spreading CCP propaganda. Reuters’ Ben Blanchard reports:

“Let the monks and nuns in the temples and monasteries have a personal feeling of the party and government’s care and warmth; let them feel the party’s benevolence, listen to the party’s words and follow the party’s path,” Chen wrote in Qiushi, which means “seeking truth”.

He called for temples and monasteries in the region to be outfitted with radios and televisions, as well as newspapers and reading rooms.

“Monks and nuns should not have to go out of their temples or monasteries to understand the party and government’s policies and social progress, or Tibet’s peace, stability and good fortune, so as to be guided to follow a path of revering scientific culture.”

[…] The government has tried, with varying degrees of success, to prevent Tibetans from accessing information about exiled spiritual leader the Dalai Lama and the exiled government on the Internet or via satellite television.

But many Tibetans are still able to get such news, either via illegal satellite television or by skirting Chinese Internet restrictions. [Source]

At the Washington Post, Ishaan Tharoor analyzes Chen’s rhetoric in the context of CCP efforts to counter the influence of minority religions in western China:

This may sound benign, but there is an edge to the message. Stability and vigilance against any inkling of separatism are mantras of Beijing’s one-party authoritarian state. Religion — particularly the Buddhism of Tibetans and the Islam of Uighurs in the neighboring restive region of Xinjiang — have long posed an implicit threat to Communist party ideology.

[…] A spokesman from the toothless Tibetan-government-in-exile, based in India, offered this retort: “Ironically, [Chen] is expressing the kind of imperialist mentality that the Communist Party criticizes and claims to fight against.” [Source]

In response to the 14th Dalai Lama’s repeated questioning of the certainty of his reincarnation, Chinese state media and TAR officials hurled criticism at the aging Tibetan spiritual leader. The Economist recently characterized Beijing’s insistence on naming the 15th Dalai Lama a a reflection of China’s flawed Tibet policy (via CDT). At TIME, Lobsang Sangay writes on contradictions between China’s stance on the current Dalai Lama and unwillingness to compromise the authority of naming his successor. Lobsang Sangay is the Sikyong (essentially, prime minister) of the exiled Tibetan government who assumed political authority from the Dalai Lama in 2011. From TIME:

Since 1959, when the current Dalai Lama escaped from Tibet, his tireless efforts for freedom for Tibetans and peace in the world have irked and outraged the Chinese Communist Party. Its leaders have called the 14th Dalai Lama a “wolf in sheep’s clothing,” “a devil with a human face,” and a “devil with horns.” They ban the Dalai Lama’s portrait and severely punish anyone in Tibet found carrying or displaying his image.

[…] In July of this year, the Dalai Lama turns 80. For decades, he has addressed the question of his reincarnation. He said that the next Dalai Lama could come in the form of reincarnation, selection or emanation. He also said that if the present situation regarding Tibet remains the same, he will be born outside Tibet, away from the control of the Chinese authorities. He warned that any candidate chosen for political ends by anyone, including China, should not be recognized or accepted.

The Chinese government’s claim to sole authority over the choice and location of the next Dalai Lama is a mockery of human intelligence. Yet Zhu Weiquin, head of the ethnic and religious affairs committee of the Chinese People’s Political Consultative Conference, asserted that the “decision-making power over the reincarnation of the Dalai Lama, and over the end or survival of this lineage, resides in the central government of China.” Imagine Fidel Castro picking the Pope! […] [Source]