Social Cohesion by Myth and Marriage in Western China 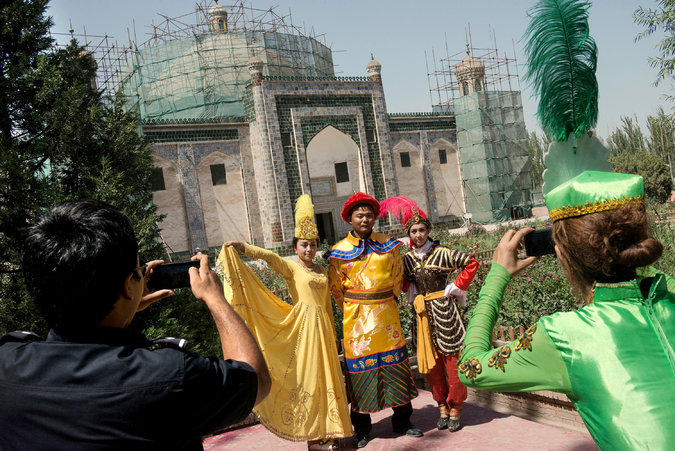 With deep-seated ethnic tensions on prominent display in China’s far west, Andrew Jacobs reports on the historical and continuing government refashioning of history to promote social cohesion. From the New York Times:

[…] When it comes to China’s ethnic minorities, the party-run history machine is especially single-minded in its effort to promote story lines that portray Uighurs, Mongolians, Tibetans and other groups as contented members of an extended family whose traditional homelands have long been part of the Chinese nation.

Alternate narratives are far less cheery. They include tales of subjugation and repression amid government-backed efforts to dilute ethnic identity through the migration of members of China’s dominant group, the Han.

Chinese historians rarely veer from the officially sanctioned scripts; Uighur and Tibetan scholars who have insisted on writing about the disagreeable aspects of Communist rule have seen their books banned and their careers destroyed.

James A. Millward, a professor at Georgetown University who studies China’s ethnically diverse borderlands, said the drive to shape history, while not unique to China, was zealously practiced by each succeeding dynasty in an effort to malign an emperor’s predecessors and glorify his own rule. […][Source]

While the propagation of state-approved myths is one method used to create a narrative of harmony in restive and ethnically distinct regions, a report from the Sydney Morning Herald notes that in Tibet, Beijing has begun implementing another technique to blur ethnic and cultural barriers: the promotion of interracial marriage:

In recent weeks, Chinese officials in charge of the Tibetan Autonomous Region have ordered a run of stories in local newspapers promoting mixed marriages. And according to newly published government reports, the government has adopted a series of policies in recent years favourable to interracial couples.

[…] “As the saying goes, ‘blood is thicker than water,’ we should make our ethnic relationship like that,” [TAR Party Chief Chen Quanguo…] said at the meeting in June, according to the state-run Tibetan Daily. The government must “actively promote intermarriages”.

[…] The government has sold the effort in state-run media as a way to achieve ethnic unity, but critics argue that its true aim is to further weaken Tibetan culture.

Tibetan poet Tsering Woeser, an activist who has frequently clashed with authorities, likened the promotion of intermarriage to the worst practices of colonization. […] [Source]

To the north in Xinjiang Uyghur Autonomous Region, ethnic unity is being urged while cultural and religious practices are simultaneously facing strict regulations. An ongoing terror crackdown in the region was launched shortly after Xi Jinping’s first presidential visit to the region in April. While on his tour, Xi declared Xinjiang the “frontline of terror,” and made clear that the government would adopt a zero-tolerance approach to violence. Another of Xi’s April talking points was the need for integration in a region marked by ethnic tension. With violence continuing in the area and the government crackdown further escalating, a recent speech by author and former PRC Minister of Culture Wang Meng echoes Xi’s call for ethnic unity. The South China Morning Post reports on Wang’s speech:

More than half a century ago, Wang Meng was branded a “rightist intellectual” after publishing a novel critical of Communist Party bureaucracy. To avoid political persecution, he applied to be transferred to the western region of Xinjiang, where he and his wife would spend almost 16 years living among ethnic Uygurs and survive the Great Cultural Revolution.

One of China’s most prominent living writers, the now octogenarian Wang has returned to Xinjiang in recent months, where he made a plea for ethnic harmony, according to a transcript of a lecture he gave at the Communist Party’s Central Party School in Beijing to cadres from the region.

[…] In his lecture to Xinjiang cadres, the former minister of culture said he hoped Han people, including those sent from elsewhere in China to Xinjiang, would study the region’s traditional cultures and make an effort to preserve their cultural heritage.

He said both the Uygur and the Han cultures are part of the Chinese civilisation and should be cherished as such.

[…] In a first reaction, Gardner Bovingdon, a professor at Indiana University who has been refused entry into China because of his research on Xinjiang, said Wang’s speech was “cultural imperialism with a human face”. [Source]