China to Construct a “Compatible” Christianity 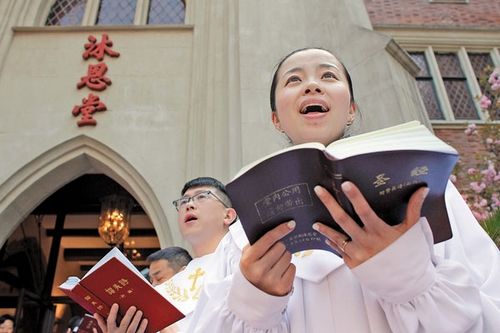 China Daily reports that, with Christianity expected to keep on gaining followers in China, the State Administration for Religious Affairs will “continue to promote the development of Christian theology” in a way “compatible with the country’s path of socialism”:

“Over the past decades, the Protestant churches in China have developed very quickly with the implementation of the country’s religious policy. In the future, we will continue to boost the development of Christianity in China,” said Wang Zuoan, director of the State Administration for Religious Affairs.

[…] “The construction of Chinese Christian theology should adapt to China’s national condition and integrate with Chinese culture,” Wang said at a seminar on the Sinicization of Christianity in Shanghai, part of an event to celebrate the 60th anniversary of the founding of the National Committee of the Three-Self Patriotic Movement of the Protestant Churches in China.

[…] A five-year campaign to promote Christian theology in China, launched in 2013, will provide theological guidance for church rostrums in China and will promote the positive and correct theological thinking with a range of publications, exchanges, discussions and evangelism.

The theological exchange campaign encourages more pastors, priests, believers and church volunteers to extract morals that are in line with the trend of the times from the Bible and other religious doctrines, said Gu Mengfei, deputy secretary-general of the National Committee of the Three-Self Patriotic Movement of the Protestant Churches in China. [Source]

Despite China Daily’s presentation of this as another step in an ongoing move towards religious tolerance, Chinese authorities have recently been accused of engaging in a crackdown on Christianity. In parts of Zhejiang province where Christianity has long been a popular form of worship, many protestant churches have been demolished or seen their crosses removed in recent months, and bloody standoffs between protesters and police have been reported. Despite government denials that this constitutes an official crackdown, a leaked document revealed authorities’ aims to ramp up regulation of “overly popular” forms of worship.

Last month, the pastor of a state sanctioned Three-Self Patriotic Movement Church was sentenced to 12 years in prison for fraud and “gathering a crowd to disrupt public order” after he played a role in a land dispute between the Nanle, Henan government and his church.

AFP’s coverage of the above China Daily report notes government unease over popular worship, and provides estimated statistics on Christianity in the country:

China has between 23 million and 40 million Protestants, accounting for 1.7 to 2.9 percent of the total population, the state-run China Daily said, citing figures given at a seminar in Shanghai.

China’s ruling Communist Party is officially atheistic and keeps a tight grip on religion for fear it could challenge its grip on power. It requires believers to worship in places approved by the state and under government supervision.

[…]Besides officially sanctioned churches, China also has “underground” or “house” churches which seek to exist outside government control and are occasionally raided and shut down.

[…]Experts estimate that there are as many as 12 million Catholics in China, split roughly evenly between the two churches [the Vatican authority, and the Beijing sanctioned Catholic church]. [Source]

In a report for the World Post, Matt Sheehan notes that Christianity’s rise in China is happening alongside resurgences in Buddhism and Mao-worship. In the report, many subjects describe this revivalism as a response to a moral and spiritual vacuum opened up by 30 years of rapid economic growth:

Luke, who asked that his Chinese name not be used because he worships in one of China’s many illegal underground churches, isn’t alone in his concern for the state of the country’s soul. As a convert to Christianity, he is one of a growing number of Chinese who are turning to a variety of faiths as they grapple with what they say is a gaping moral abyss in society.

“People today are afraid of showing love, afraid of being laughed at by other people,” Luke lamented. “That spells the end of society.”

“Many people perceive a moral and spiritual crisis in China today,” wrote the editors of the Review of Religion and Chinese Society, a new academic journal dissecting China’s religious revival. “The foundation of a better future for China is believed by many people to be a spiritual renewal.”

The topics of faith and the state of one’s soul have been on the backburner for many Chinese since 1978, when leader Deng Xiaoping turned China away from the pursuit of a Communist utopia and toward the construction of a modern market economy. [Source]