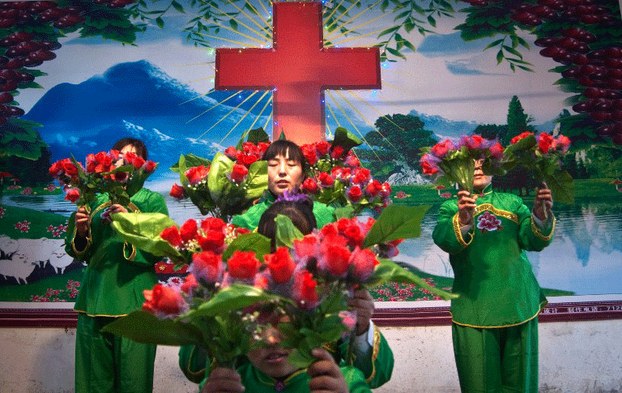 The AP reports that a Christian congregation’s Christmas meeting in Nanle county, Henan province was blocked as part of an ongoing crackdown on the local church:

The canceled meeting at the church in Henan province’s Nanle county came during a monthlong crackdown on the church over a land dispute that pits its popular preacher against the county government.

Nanle’s congregation had wanted to hold a prayer meeting on Monday morning to mark Christmas. But they also sought to use the gathering to rally support for their pastor, Zhang Shaojie, and more than a dozen of his aides who have been detained by police for more than a month and denied access to their lawyers.

Rights attorney Xia Jun said he and several other lawyers who had traveled to Nanle were on their way to the prayer meeting when they were blocked by about two dozen middle-aged women and some men.

The crowd blocked the road with a ladder and harassed the lawyers, preventing them from either going to the church or heading in the direction from which they came. Xia said he believed local authorities hired the group to chase the visitors out of the county. [Source]

A separate report from the AP has more background on pastor Zhang Shaojie and the land dispute in Nanle:

Pastor Zhang Shaojie and his aides were arrested more than a month ago over a land dispute and have been denied access to lawyers. His case has drawn the scrutiny of rights lawyers and activists who say it exposes a county government’s ability to act with impunity against a local church even if it is state-sanctioned.

While land disputes are common in China, Zhang’s popularity has prompted many of the country’s Christians to rally around him to defend what they say is religious freedom. They say the county government reneged on an agreement to provide Zhang’s congregation with land for a building, leaving them without a place of worship. [Source]

Seen as troublemakers and a threat to social stability, [petitioners] are often subjected to physical and mental abuse by law enforcement. Many are sent to illegal detention centres known as “black jails” before being forcibly returned to their hometowns; some are even sent to mental asylums. Until “re-education through labour” was scrapped this year, many were sent to labour camps where many underwent torture.

Xu Yonghai , the leader of the Shengai, or Holy Love, Christian Fellowship, said that, for the petitioners, “99 per cent of their cases will not be resolved”. But in recent years he has witnessed Christianity transform many embattled lives. [Source]