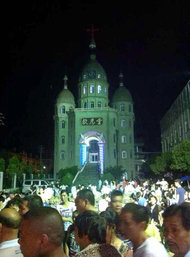 Christianity has been steadily gaining followers in Wenzhou, Zhejiang since the mid 1800s; in a city sometimes called the “Jerusalem of the East,” an estimated 15% of the local population are church-going Christians. In recent months, many Christian churches in and around Wenzhou have been demolished or seen their crosses removed, and many more have been notified by provincial authorities that they will soon share one of these fates. Early Monday morning, there was a violent confrontation between police and protesters over a cross on display at the Salvation Church in Wenzhou. Reuters reports:

Police in eastern China clashed in the middle of the night with Christian protesters massed around their church on Monday, but failed to carry out a government order to remove a cross from the building, according to witnesses and online accounts.

Several people were injured in the two-hour melee.

[…] “We did not want them to get close, so we joined up to stop them getting in, but they came at us and beat us,” one of the protesters, who gave his family name as Zhang, told Reuters by telephone, putting the number of police at about 500.

Zhang said police had been unable to remove the cross, but had locked down the site.

Another witness, who asked not to be identified, said the clashes had started at 2 a.m. and went on for two hours. She knew of at least five people who needed hospital treatment.

“We are Christians and are not looking for trouble, and if the government comes to us with reasonable requests, we will not oppose it. But using force on us at 2 a.m. is unacceptable and we cannot understand why they are doing it,” she added. […] [Source]

While the government has denied accusations of a campaign against Christianity, a recently leaked policy document on the regulation of “overly popular” religious activities mentioned only Christianity. The New York Times notes that local Christians are standing guard in all of the Wenzhou area churches recently informed of impending cross removals or demolition. The Times also reports that, much to the disappointment of congregation members, following the bloody scuffle, the director of the Salvation Church agreed to the cross removal:

“My heart is broken,” said another man who has been guarding the church every night since the Monday morning melee with the police and strongly opposes removing the cross. “It’s so disappointing,” said the man, also surnamed Chen. “We’ve defended the church and we shed blood, but he compromised to agree that the cross be removed. May God have mercy on him.”

He said he was afraid that the police would return after the storm passes, and try once again to bring down the cross. “The storm came here today; they didn’t come,” he said. “I don’t know if they’ll come back tomorrow. We will defend the cross to the death.”

[…] If Christian resistance cannot prevent crosses from being removed in Zhejiang, [sociology professor Yang Fenggang] said, it was possible that similar measures might be taken in other provinces in the next year or two. Referring to the clash at Salvation Church on Monday, he said, “If similar things happen again but don’t get any attention from the outside world, this crackdown may continue.” [Source]

In Henan Province earlier this month, Zhang Shaojie, the pastor of a state-sanctioned Protestant church, was sentenced to 12 years in prison on charges of fraud and “gathering a crowd to disrupt public order.” Zhang had earlier played a role in a land dispute between his church and the local government.