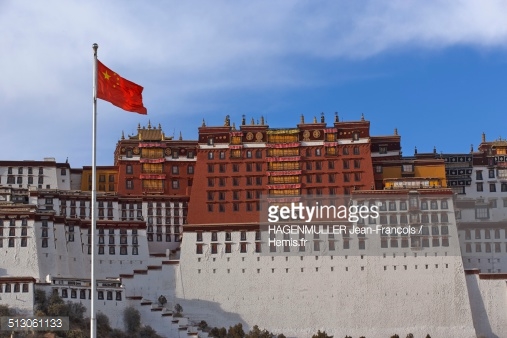 It was not clear on what grounds the assessments would be made. China often uses terms such as “patriotic” and “harmonious” to mean allegiance to political authorities.

The drive would be aimed at making monks and nuns “feel the warmth and care of the Party and government”, Chen added.

[…] All monasteries must be equipped with “national flags, telephone connections, newspapers and reading rooms”, Chen wrote, adding that roads to tie such facilities more closely to other parts of Tibet would also be built.

Propaganda activities aimed at leading more monks to “educate themselves in patriotism” will also be held, he said. [Source]

At VICE News, Sally Hayden quotes a press officer from the Dharamsala-based Central Tibetan Administration and an activist with Washington-based nonprofit International Campaign for Tibet on Chen’s recent writings:

Tsering Wangchuk, press officer for the Central Tibetan Administration, spoke to VICE News about the comments, which he labeled “provocative.”

“Time and again [Chen] has given such senseless comments, completely devoid of any understanding of the culture and the values of the Tibetan people living in that area,” Wangchuk said.

[…] Matteo Mecacci, a former member of the Italian parliament and current president of the International Campaign for Tibet, told VICE News that he believed the only thing that was new about Chen’s recent statements is that they are becoming “more and more aggressive.”

“Communist Party officials have for a long time tried to control all activities that are taking place, in Tibet in particular in monasteries,” he said. Mecacci also pointed out that there is already a state presence in most monasteries. [Source]

In a 2013 essay published by Qiushi, Chen Quanguo wrote that the government would “work hard to ensure that the voice and image of the Party is heard and seen over the vast expanses (of Tibet) […] and that the voice and image of the enemy forces and the Dalai clique are neither seen nor heard.” While the Dalai Lama maintains that he seeks not Tibetan independence but greater cultural autonomy and ethnic coexistence in Tibetan regions, Beijing continues to consider the spiritual leader a “separatist.”

Fearing the ideological influence of religion in ethnically distinct and often troubled regions, government authorities take special measures to limit religious practice and the spread of information not sanctioned by the Party (for examples outside of Tibet, read about Internet blackouts and regulations on Islamic custom and dress in Xinjiang). Aside from these overt measures, Beijing has long been suspected of fueling a rift within the Gelug school of Tibetan Buddhism—the school that gave birth to the institution of the Dalai Lama.

In 1978, the Dalai Lama began to speak out against practices involving the protector deity Dorje/Dolgyal Shugden, sensing that the deity’s controversial status could lead to sectarian division, and hence damage a pan-Tibetan identity. Since then, organizations devoted to Shugden—the UK-based New Kadampa Tradition and Western Shugden Society, for example—have rallied against the Dalai Lama as they’ve gained a significant number of followers in the West. The International Campaign for Tibet has now translated a Party directive from last year which may serve as evidence that Shugden promotion plays an important role in Beijing’s campaign against the Dalai Lama in Tibetan regions of China. From ICT’s report on the directive:

The ‘Opinions’ document indicates that the Chinese authorities are politicizing an internal Buddhist matter as a divisive weapon in a systematic ideological campaign against the Dalai Lama that attempts to sever connections between Tibetans in exile and those inside Tibet. It can also be viewed as a means of diverting attention from oppressive Communist Party policies against religion by attempting to drive a wedge among Tibetans. In the document, the Party Committee does not only blame the Dalai Lama for “instigating the self-immolations” that have swept Tibet since 2009,[4] but it also blames the “Dalai Clique” for using “the Gyalchen Shugden issue to stir up divisions and instability in Tibet.”

[…] Matteo Mecacci, President of the International Campaign for Tibet, said: “This document on Shugden opens up a new front on the cultural battleground targeting Tibetans for their loyalty to the Dalai Lama, in a political environment that is already deeply oppressive. It also provides confirmation that the Shugden supporters in the West are aligned with the Chinese Communist government’s agenda on Tibet, which threatens the very survival of Tibetan religion and cultural identity.”

[…] Inside the PRC, officials have long used Shugden propitiation to create divisions between Tibetans, often encouraging Tibetans to propitiate Shugden and offering financial inducements to do so, as part of their objective of undermining the Dalai Lama. Shugden statues have been installed in monasteries in different parts of Tibet, often against the will of resident monks. [Source]

Also see ICT’s full translation of the February 2014 TAR Party committee circular “Some Opinions on Dealing Correctly With the ‘Gyalchen Shugden’ Issue,” which describes the Shugden controversy as “an important front in our struggle with the Dalai Clique.”