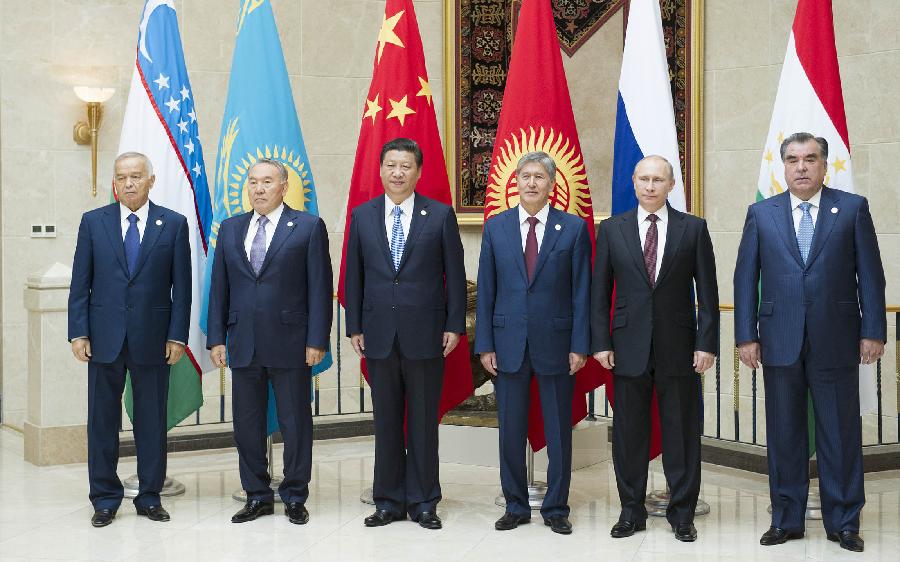 After voicing opposition to a proposed U.S. attack on Syria at the G20 summit in Russia last week, Xi Jinping embarked on his first tour of Central Asia as president. While in the region of strategic importance to Beijing and amid ongoing instability in the Middle East, Xi made agreements sure to bolster his country’s energy security. To close up his trip, Xi is at the 13th summit of the Shanghai Cooperation Organization (SCO). Xinhua reports on a declaration signed by the leaders of the SCO member states in Kyrgyzstan, much of which focused on highlighting the organization’s commitment to nonintervention:

The Bishkek Declaration, signed by the six presidents of the SCO countries of China, Kazakhstan, Kyrgyzstan, Russia, Tajikistan and Uzbekistan, said the international relations are undergoing profound changes with factors of instability and uncertainty remarkably increasing.

International and regional disputes should be peacefully resolved through political and diplomatic means under the principles of equality, respect for sovereignty and territorial integrity, non-interference into others’ internal affairs and no use or threat of use of force, it said.

[…]The declaration also expressed concern on the issue of Iran, calling the threat of use of force by individual countries and unilateral sanctions unacceptable.

The bloc believes that the confrontation, if allowed to grow, will bring untold damages to peace and security of the region and the world at large.

Hasaan Rouhani, the newly installed President of Iran—also an SCO observer state—was present at the summit in Kyrgyzstan. An in-depth analysis of China’s engagement with and interests in Central Asia from the Asia Times foreshadows the importance of the China-Russia-Iran relationship:

The importance of this triangulation cannot be overstated. Oh, to be a fly on the wall in that Xi-Putin-Rouhani Kyrgyz room. Tehran, Moscow and Beijing are more than ever united on bringing about a new multipolar international order. They share the vision that a victory for the axis of warmongers on Syria will be the prelude for a future war on Iran – and further harassment of both Russia and China. [Source]

With U.S. plans to withdraw troops in 2014, the future of Afghanistan was a major discussion point at last year’s SCO summit in Beijing, at which the country was granted SCO observer status. In an interview with Georgetown professor and China expert James Reardon-Anderson, Radio Free Europe notes that the U.S. is unlikely to put priority in the “new Great Game” of Central Asia, instead focusing its resources on Asian maritime regions. With Washington’s eye moving away from Central Asia, Reardon-Anderson compares Chinese and Russian interests in the region:

Clearly, the Russians have a greater interest in Central Asia than does the United States. That is primarily an area that will be a focus of attention from both the Russians and the Chinese. However, that is dwarfed by Russian interests to the west and the south — in particular, Belarus and Ukraine and the Caucasus. That’s much closer to Russian interests.

There is a much greater profit from natural-gas supply lines through Ukraine to Western Europe. There is a much greater interest in security access to warm-water ports through Sevastopol into the Black Sea. Those are much bigger issues for the Russians than Central Asia. So I don’t see this as a major tilt of Russian interests and national commitment in Central Asia. I don’t think that is true.

[…]The Chinese have claimed that Uyghur militants [in western China] have been trained in Pakistan — the same military training bases in Pakistan that trained members of the Taliban in Afghanistan and other such Islamic extremist groups. So the Chinese are quite concerned about the possible training of Uyghur militants in Pakistan. And, of course, as the situation disintegrates in Afghanistan, that is likely to be another area of vulnerability.

[For Beijing], the virtue of the “Stans” — the five Central Asian republics — is that they have relatively strong authoritarian governments with whom the Chinese can deal [as they] hope to contain cross-border shipments of arms or the movement of the [Uyghur] population. The disintegration of authority in Afghanistan — the continuing situation, particularly along the Afghan border and Pakistan — make it much more difficult to control the Uyghurs in that area.

But comradeship in authoritarianism, the containment of separatism, and energy security aren’t the only prospects China sees in Central Asia—economic engagement is also a chief concern. On his travels, Xi unveiled China’s new Central Asia policy as a “new Silk Road” of free trade and exchange. China Daily reports:

To realize the goal, which Xi set out in his first formal policy speech on Central Asia, they suggested a free trade zone that includes China and Eurasian countries, which have a combined population of 3 billion.

In a speech at Kazakhstan’s Nazarbayev University on Saturday, Xi proposed establishing a Silk Road Economic Belt, similar to the original, ancient Silk Road of more than 2,000 years ago, to boost cooperation between China and Eurasian countries.