At G20 Summit, Xi Weighs in on Syria 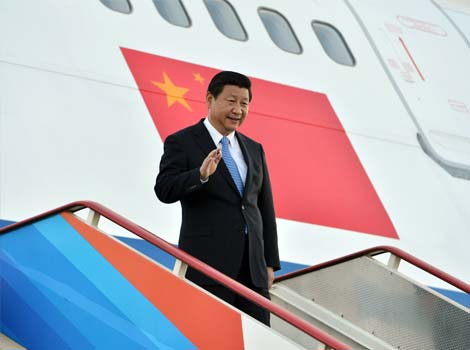 Aa Barack Obama is continuing to seek congressional approval for a military strike against Syria, Xi Jinping himself voiced opposition to the U.S. president’s proposed course of action at the G20 summit in Russia, which concluded today. Reuters reports:

Chinese President Xi Jinping told his U.S. counterpart Barack Obama on Friday that the crisis in Syria should not be resolved through a military strike and urged him to consider a political solution, state news agency Xinhua said.

Xi’s are the highest-level comments from China since an August 21 chemical weapons attack in Syria. They follow remarks by a foreign ministry spokesman, who urged a role for the U.N. Security Council in resolving the crisis after the United States said it had given up trying to work with the council on Syria.

“A political solution is the only right way out for the Syrian crisis, and a military strike cannot solve the problem from the root,” Xinhua quoted Xi as telling Obama on the sidelines of a G20 summit in St. Petersburg in Russia.

“We expect certain countries to have a second thought before action.” [Source]

At the summit of world leaders in St. Petersburg, Xi also warned that a U.S. attack could lead to an economic downturn. Obama used the final day of the summit to gather support for the proposed military intervention that China and Russia—two of five UN Security Council members—have been vocal in opposing since it became a possibility. On Monday, Reuters reported that the U.S. had briefed China on evidence that the Syrian government used sarin nerve gas on rebels. China had previously urged the importance of waiting for the yet-to-be released results of the UN probe that concluded on August 30.

An article from China Daily explains that, without approval from the UN Security Council, any foreign military action in Syria would be a breach of international  law:

United Nations Secretary-General Ban Ki-moon said on Tuesday that any military attack on Syria must have the approval of the UN Security Council. He said that a US attack without the endorsement of the UN would be unlawful and could lead to further turmoil in the conflict-ridden country.

Ban said any use of chemical weapons by anyone under any circumstances will be a serious violation of international law and any perpetrators must be brought to justice.

[…]Without UN authorization, the US obviously lacks a legal basis to proceed with military action and the arguments it is using to justify its case do not hold water. [Source]

While Obama refused to meet with Putin at the G20 summit in condemnation of Russia’s opposition, Politico notes pragmatism in the U.S. president’s willingness to sit down with President Xi:

As American officials bitterly denounce Russia for blocking the United Nations from endorsing action over Syria’s alleged use of chemical weapons, another global power that has taken a similar stand seems to be getting a free pass from the U.S: China.

[…]Much of the difference in U.S. treatment of Russia and China can be chalked up to simple realpolitik: the U.S. values its relationship with China more than with Russia and is more willing to jeopardize ties with Moscow over a single issue like the brutal Syria conflict.

“Whereas our relationship with Russia is important but not the primary relationship in the new global world, we have concluded otherwise with regard to China — that whatever we may think of their form of government, whatever their deportment may be, we have to engage,” said Orville Schell of the Asia Society. “That presumption is sort of behind the way we treat each of them in a rather different manner.” [Source]

China and Russia have long been opposed to international involvement in Syria, a stance reflecting their commitment to noninterventionism. In early 2012, Russia and China were the only of five UN Security Council members to veto a draft resolution condemning violence carried out by the Syrian government. After the debate played a central role at this week’s G20 summit, the world remains divided on military intervention in Syria.