China Speaks Out Against Intervention in Syria 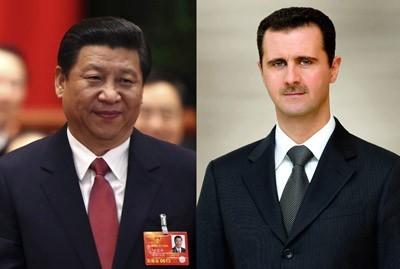 After the Syrian government’s alleged use of chemical weapons against rebels and civilians last week, the UN probe that China is cautiously supporting is being extended as the White House is seriously considering direct military response. Meanwhile, Russia and China—both members of the UN Security Council—have issued warnings against military intervention in Syria. BBC reports:

Russia and China have stepped up their warnings against military intervention in Syria, with Moscow saying any such action would have “catastrophic consequences” for the region.

The UN Security Council is divided, with Russia and China opposing military intervention and the UK and France warning that the UN could be bypassed if there was “great humanitarian need”.

[…]Mr Lavrov said the use of force without Security Council backing would be “a crude violation of international law”. [Source]

Likewise, China’s state media is speaking out against intervention. More from the BBC:

“There should not be rash assertions until the truth is verified, let alone a ‘presumption of guilt’ or using this as a pretext to take unilateral military action,” stresses Xinhua, the country’s most authoritative official news agency.

Some state media are also warning against a repeat of the US-led invasion of Iraq in 2003 without a United Nations mandate.

“The international community needs to raise vigilance against external forces replicating this model in Syria. The ‘use of chemical weapons’ cannot be handled with ‘groundless’ measures and any follow-up actions need to be supported by true and reliable investigation findings,” says the People’s Daily, the Communist Party’s official newspaper.

“Forces around the world that oppose external military intervention should unite to prevent as far as possible the US, UK and others from launching air strikes against Syria. If they cannot stop this, they should openly support the Syrian government to engage in resistance,” says the Global Times, a newspaper affiliated to the People’s Daily. [Source]

In a post summarizing the motivations that keep Syria’s allies on their side, NPR’s Parallels blog notes China’s trade links, commitment to noninterventionism, and pragmatic disposition:

China and Syria have close trade links, but that isn’t the only reason Beijing opposes Western intervention.

“The Chinese historically never supported external intervention and particularly the use of force against a regime,” says Bonnie Glaser, senior adviser for Asia at the Center for Strategic and International Studies.

China might also have been burned by the intervention in Libya. Neither Beijing nor Moscow vetoed the U.N. resolution that eventually led to a NATO-led military intervention, which led to the ouster of Moammar Gadhafi. China believed that action went beyond the resolution’s mandate.

China will continue to support Assad “until it becomes clear that the wind was blowing the other way,” Glasser says.

“If the regime falls,” she adds, “then the Chinese will quickly become silent.” [Source]

In an analysis of China’s role in the Middle East, Reuters describes Beijing’s interest in the region as outweighing its agency:

The worsening Syria conflict has exposed an uncomfortable truth behind China’s cherished policy of non-interference: Beijing cannot do much to influence events even if it wanted to.

With weak and untested military forces unable to project power in the Middle East, China can only play a low-key role in a region that is crucial for its energy security.

[…]China has few economic interests in Syria itself but believes it has a strategic and diplomatic imperative to ensure Middle East stability and to protect a vital energy source. […] [Source]

For more on China’s interactions with Syria, the Middle East, or the UN Security Council, see prior CDT coverage.